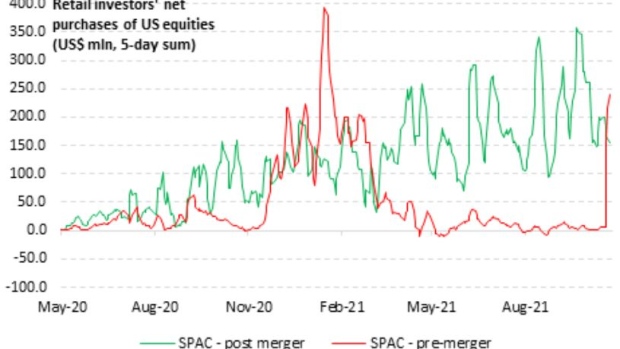 (Bloomberg) -- Retail investors are rushing back into blank check companies, and the mania surrounding a company tied to former President Donald Trump is a big reason.

The buying frenzy in Digital World Acquisition Corp., the special-purpose acquisition company set to merge with the former President’s Trump Media & Technology Group, sparked a surge of 1,225% at one point last week. While those gains have been cut in half, the excitement surrounding blank check stocks that have yet to merge with targets has spread across trader chatrooms.

Individual investor interest has spread from Digital World to other pre-merger SPACs like B. Riley Principal 150 Merger Corp. and Altimeter Growth Corp. over the past week as retail traders hype shares across platforms like Stocktwits and Twitter. The same enthusiasm was, however, missing for those that have already been closed like DraftKings Inc. and Lucid Group Inc., according to data from Vanda Research.

“Retail purchases of these blank check companies have been so large that they’ve exceeded those of post-merger SPACs,” Vanda’s Ben Onatibia and Giacomo Pierantoni said. “We hadn’t seen something like this since Q4 ’20, when the SPAC frenzy reached its apex.”

The investment vehicle, which took the market by storm in late 2020 and through the start of the year, has broadly fallen out of favor from a February peak. The Indxx SPAC & NextGen IPO Index has fallen 28% from a mid-February peak, while a basket of post-merger SPACs compiled by Vanda is down 44% from a similar high. That mirrors a decline for the Bloomberg compiled De-SPAC Index since February.

While the group is up more than 4% in the past two weeks, it pales in comparison to newer retail favorites like Digital World which is up 620% since last Wednesday and Altimeter’s, which is seeking to merge with Asia’s ride hailing-app Grab Holdings Inc., 20% gain.

Digital World has been among the most bought assets on Fidelity’s platform since news of the planned tieup with Trump’s company. Individuals have bought more than $210 million worth of Digital World over the past week, data compiled by Vanda show, with amateurs buying nearly $5 million worth of Altimeter over the same period.

Throughout the pandemic, individual investors armed with trading apps like Robinhood have touted their bets on platforms like Reddit’s WallStreetBets and across Twitter, egging their peers on to invest alongside them. While the craze tied to retail investors has spanned speculative meme stocks and joke cryptocurrencies, it has also encapsulated the rise of blank check companies.

The recent return of retail investors marks a departure from trends that show institutional investors are driving the stock market these days with individuals preferring to buy the dip, according to Vanda.