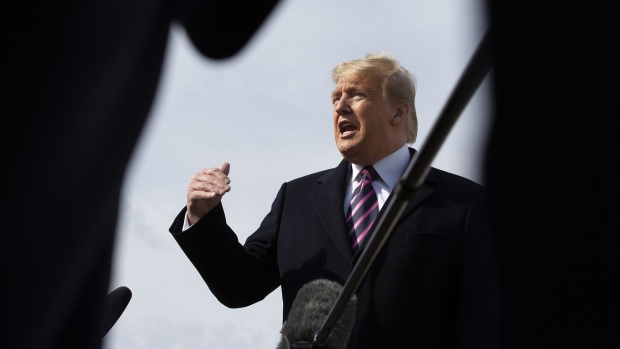 ​President Donald Trump convened an extraordinary gathering of the oil industry’s competing factions at the White House on Friday, as a global pandemic and oil-price war weigh on markets.

Chief executives of the nation’s biggest refiners and producers met to discuss possible relief efforts from the administration, including potential cuts in U.S. production to bring the price of crude back from a historic plunge, according to people familiar with the matter.

But there are deep divisions among the various factions over what should be done, especially on the question of possible tariffs on Saudi Arabian oil, which may force Trump to make a difficult decision that could hurt some executives who are among his most ardent supporters.

Trump has sought to forge an agreement with Russia and Saudi Arabia to end their price war by cutting back on production, a move that could boost prices and help drillers and refiners located in states like Texas and Louisiana that are crucial to his re-election in the fall. Canada is also in talks with OPEC and the U.S. about the state of the global oil market.

But it isn’t clear whether Russia and Saudi Arabia would agree to cut output unless the U.S. also takes part -- a move that would be unpopular with some U.S. producers. A meeting of OPEC+ oil cartel members is set for Monday and Vladimir Putin said his country is prepared to take part in deep reductions in oil production.

Trump’s discussion with U.S. producers is “going to be a productive meeting, it will be an exchange of views,” chief White House economic adviser Larry Kudlow told reporters on Friday.

West Texas Intermediate crude suffered its biggest-ever quarterly decline in the three months through March. Even after the past two days’ rally, futures are still down 56 per cent this year.

One of the most contentious matters among the oil giants is whether Trump should slap tariffs on Saudi crude to get the kingdom to reduce its output.

It’s an idea championed by Oklahoma oil executive Harold Hamm, a Trump confidant on energy who also attended the meeting Friday, as well as some Republican senators who say tariffs could help the president win concessions from Saudi Arabia and stabilize the global crude market.

Hamm thanked Trump at the meeting Friday for speaking to Putin and Saudi Crown Prince Mohammed bin Salman about the issue.

Tariffs are also a weapon of choice for the president, who has wielded it against China, foreign steel producers and during trade negotiations with Mexico and Canada. Within the oil industry, the idea has exposed deep rifts, with refiners and Northeast U.S. gas producers firmly opposed.

“If they were to go down this route it would probably result in some refineries shutting down completely,” said Chet Thompson, head of the industry’s top trade group, the American Fuel & Petrochemical Manufacturers.

Trump has indicated he already has a plan in mind for helping oil companies he says are being “ravaged” by a price war between Russia and Saudi Arabia. He said he knows what to do to solve the problem, though he declined to reveal the strategy other than to say it’s “tough” and “I’d rather not do that.”

Instead, the president said, he hoped Russians and the Saudis would strike an agreement to cut production.

Large, integrated industry giants such as Exxon and Chevron, which will be represented in the meeting Friday, have typically opposed any kind of government intervention in crude markets. They have better access to capital and are more diversified than independent producers, making them more resilient to ride the rout.