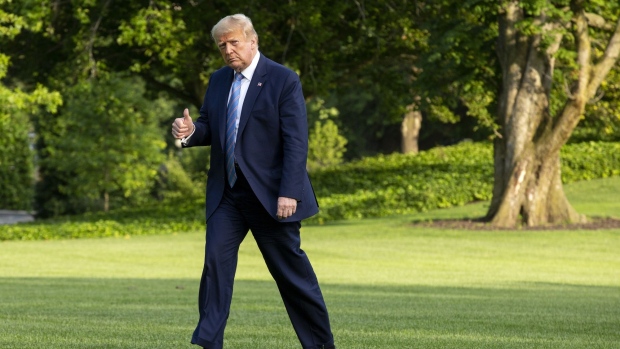 Donald Trump gives a thumbs up while walking on the South Lawn of the White House. Photographer: Stefani Reynolds/Bloomberg , Bloomberg

Donald Trump heads to Mount Rushmore Friday for an early Independence Day celebration with thousands of guests who won’t be required to wear masks or socially distance, as the president continues an aggressive public schedule despite a spike in U.S. coronavirus cases.

Friday’s show will feature a military flyover and the first fireworks in more than a decade at the mountain carved with the visages of four American presidents. Trump intervened at the request of South Dakota Governor Kristi Noem to restart an annual tradition that had been halted over environmental and wildfire concerns.

“We’ve going to have a tremendous evening,” Trump said Thursday at the White House. “It’s going to be a fireworks display like few people have seen.”

The mass gathering -- which is expected to include about 7,500 ticketed guests -- comes as members of Trump’s coronavirus task force are pleading with Americans to wear masks and practice social distancing. New cases have surged in southern and western states, and U.S. daily infections reached new highs, topping 50,000 for the second consecutive day on Thursday.

The U.S. president, who spent Friday morning golfing at Trump National Golf Club in Washington’s Virginia suburbs, has maintained his push for states to reopen as quickly as possible. He attributes the rise in cases to expanded testing even though the percentage of positive tests is also increasing.

Trump, who faces re-election in November and has seen his poll numbers decline through the pandemic, has said that the economic costs of a prolonged shutdown could outweigh the health benefits and has sought to demonstrate his determination to resume public activities. Last month, he held a campaign rally in Oklahoma and an event with young conservatives in Arizona where attendees were packed closely together and few wore masks.

Trump plans to speak in advance of fireworks at another Independence Day event, to be held Saturday in Washington, where city officials urged residents to stay home to prevent the spread of the virus.

Noem, a Republican, told Fox News that the state was encouraging attendees to “focus on personal responsibility.”

“We told those folks that have concerns that they can stay home, but those who want to come and join us, we’ll be giving out free face masks, if they choose to wear one,” Noem said Monday. “But we will not be social distancing.”

White House aide Kellyanne Conway defended the event, saying that the state’s infection rate is relatively low, its hospital capacity was high and the Rushmore site was “open air.” As of Thursday, the state had fewer than 100 coronavirus-related deaths during the pandemic, and fewer than 1,000 known active cases.

“You’re outside, it’s very big and airy,” Conway told reporters at the White House on Wednesday. She encouraged attendees to wear face coverings at the event. She said that precaution wasn’t necessary for the president, who is tested daily for the coronavirus and thus unlikely to spread the disease.

“It’s important for people who can’t be practicing social distancing to be wearing masks,” she said.

In addition to debate over the example Trump is setting with the latest mass gathering, the event is expected to draw protests from environmentalists who say the fireworks display risks the spread of chemicals and a possible forest fire, as well as from Native American groups who say the 79-year-old monument is on land illegally seized from the Sioux.

“Trump coming here is a safety concern not just for my people inside and outside the reservation, but for people in the Great Plains,” Oglala Sioux President Julian Bear Runner said in an interview with the Guardian. “We have such limited resources in Black Hills, and we’re already seeing infections rising.”

Some activists have called for removing the Rushmore monument, noting that George Washington and Thomas Jefferson were slave owners and the execution of dozens of Native American combatants in the Dakota War during Lincoln’s presidency. Trump said this week that he would block any such effort.

“Somebody said they want to see that come down, that’s never coming down,” the president said Wednesday in an interview with Sinclair television.

The president has spent recent weeks denouncing efforts to remove statues of controversial figures in the aftermath of the killing of George Floyd, an unarmed Black man, while in Minneapolis police custody.

Trump’s visit comes even as some portions of the memorial park remain closed because of the pandemic, including its visitor center and a half-mile trail that takes sightseers closer to the monument.

The National Park Service has taken a phased, site-by-site approach to opening the 419 historic battlefields, natural sites, heritage areas and other attractions it manages. However, even in parks open to the public, officials have restricted access to some popular trails and attractions that otherwise might be overrun by crowds.

Trump has sometimes mused that his face might be carved into the mountain one day alongside the images of Presidents Washington, Jefferson, Theodore Roosevelt and Abraham Lincoln.

“I’d ask whether or not you think I will some day be on Mt. Rushmore,” Trump said at a July 2017 rally in Youngstown, Ohio. But, he said, “If I did it joking, totally joking, having fun, the fake news media will say, ‘He believes he should be on Mt. Rushmore.’ So I won’t say it, OK?”

--With assistance from Jennifer A. Dlouhy and Mark Satter.