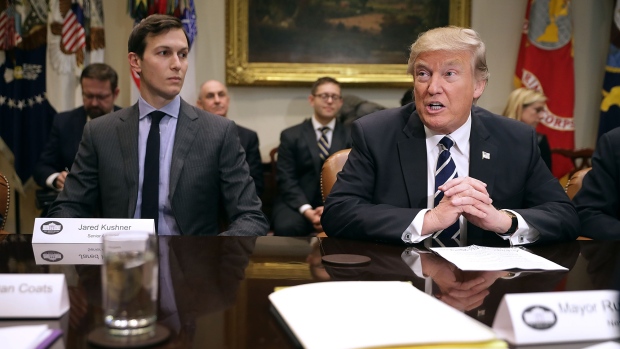 (Bloomberg) -- President Donald Trump will unveil a new plan Thursday to overhaul the existing U.S. immigration system with a program developed by his son-in-law, Jared Kushner, that stands little chance of passing Congress.

The proposal calls for some of Trump’s promised border wall to be constructed while ignoring key Democratic priorities, including legal status for millions of immigrants brought to the country illegally as children.

The plan would rank would-be immigrants by metrics including age, English proficiency, an offer of employment at certain wage levels or in specialty jobs, or vocational training, according to three administration officials. The officials asked not to be identified discussing the plan ahead of Trump’s speech.

The proposal includes construction of Trump’s promised wall at 33 “priority” locations along the Mexican border, and higher immigration fees would finance continuous upgrades of infrastructure along the border and at ports of entry. The White House would also overhaul the asylum process in a bid to reduce claims for refugee status at the border, after a surge of migrants claiming danger in their home countries overwhelmed immigration courts.

The White House says the system would attract more skilled immigrants who could boost the U.S. economy, while reducing the flow of illegal immigration. But Kushner’s plan seems unlikely to gain traction on Capitol Hill -- the administration officials declined to name even Republican lawmakers who would support it.

The proposal does not address how the administration would handle millions of immigrants already living in the country without documentation. It would eliminate programs championed by Democrats, including the diversity visa lottery, instead offering additional ‘points’ under the merit system to citizens of certain countries. The officials did not say which countries would be favored.

The plan is silent on the Deferred Action for Childhood Arrivals program, which offers deportation protection for immigrants brought to the country as children.

That omission is likely to be a key stumbling block for Democrats and moderate Republican senators, who have said that protecting so-called "Dreamers" is crucial to winning their support for changes to the immigration system.

The officials said the plan, which Trump will unveil in a speech at the White House, is largely designed to unify Republicans on immigration policy while demonstrating that the party is not anti-immigrant. Battling that perception will be key to the president’s re-election efforts after the 2018 midterm elections -- the GOP suffered heavy losses in the U.S. House after Trump spent the closing months of the campaign warning that Central American immigrants are dangerous.

And scrutiny of the president’s handling of immigration has only intensified after he forced a 35-day government shutdown late last year over border wall funding and dismissed a number of top officials handling immigration enforcement, including former Homeland Security Secretary Kirstjen Nielsen.

Kushner has met for weeks with GOP lawmakers and outside groups as he crafted the plan. On Tuesday, he presented the plan to GOP senators alongside Stephen Miller, Trump’s hard-line domestic policy adviser, and Kevin Hassett, the president’s economic adviser, in what was regarded as an effort to show that the disparate camps within the White House were united behind the proposal.

That conversation included a presentation that attempted to demonstrate that maintaining or increasing current immigration levels but reallocating how the current 1.1 million green cards are distributed wouldn’t hurt middle class workers, according to one senior administration official who requested anonymity to discuss the closed-door discussion.

According to data prepared by the White House counsel of economic advisers, the number of green cards issued to individuals with at least bachelor degrees will increase to 71% from 42%, the share of immigrants employed would improve to 69% from 55%, and the average annual wage among the employed would rise to $96,000 from $43,000.

Those numbers underscore the extent to which the White House proposal would dramatically change the composition of immigrants earning green cards. The percentage of individuals receiving permission to immigrate to the U.S. because of family connections would be slashed to just 33% from 66% of current recipients under the new plan, while the number winning entry for humanitarian or diversity reasons would go to 10% from 22%. By contrast, those getting green cards based on employment or skills would increase to 57% from 12%.

That’s likely to spark concern from human rights groups who argue the new proposal would largely limit access to the U.S. for individuals in developing or war-torn nations. And the plan could also run into opposition from employers in fields including construction and farming who rely on immigrants to fill low-skilled positions.

Immigration activists have previously denounced merit-based proposals as a backdoor attempt to limit legal migration by eliminating the ability of U.S. citizens and legal residents to sponsor foreign family members’ entry into the country. While the White House says current levels of immigration will be maintained, officials did not say how or whether that number would grow over time.

The White House is not expected to release legislative text or even full details of the plan with Trump’s speech on Thursday, but officials say that the president is endorsing efforts to codify elements of the plan -- including a bill introduced by Senator Lindsey Graham, a South Carolina Republican, that would prohibit Central Americans from seeking asylum at the border. Instead, they would have to apply in Mexico or at consulates in their home countries.

The Obama administration had set up a program allowing Central American minors to make refugee requests in other countries’ consulates. The Trump administration shut it down.

Graham also wants to add 500 immigration judges and increase detention time for undocumented families to a maximum 100 days from the current limit of 20 days.

Graham said that while he supported the main elements of the Kushner plan, he warned that Trump “will own this problem” if he doesn’t agree to some asylum law changes that Democrats support in order to dissuade families from leaving Central America in the first place.

--With assistance from Steven T. Dennis.

To contact the editor responsible for this story: Alex Wayne at awayne3@bloomberg.net