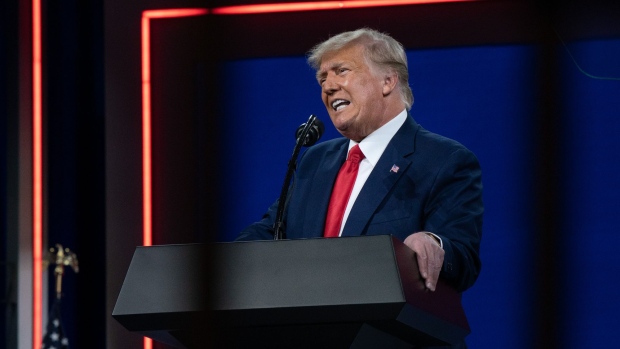 (Bloomberg) -- Donald Trump plans to tell Republican donors that the party will retake control of Congress in the 2022 midterm elections and that “a Republican candidate” will win the White House in 2024 by championing working-class Americans, as he holds out the prospect of running again.

Trump’s speech at a Republican National Committee donor event Saturday night will call for building on certain gains the party made under him as the path to recover, according to prepared remarks obtained by Bloomberg News, even though it lost control of the House, the Senate and the White House during his presidency.

“We are gathered tonight to talk about the future of the Republican Party -- and what we must do to set our candidates on a course to victory,” Trump plans to say at his Mar-a-Lago resort in Florida, where he has lived since leaving the White House.

“I stand before you this evening filled with confidence that in 2022, we are going to take back the House and we are going to reclaim the Senate -- and then in 2024, a Republican candidate is going to win the White House.”

A person familiar with Trump’s thinking said the former president isn’t explicitly acknowledging he may or may not run again, but rather is keeping everyone guessing.

Republicans have converged on Florida this weekend for various events aimed at charting the party’s course back to power. Attendees at the RNC spring donor retreat in Palm Beach will make a side trip to Trump’s club, reflecting the former president’s dominant position.

But some GOP donors and leaders want the party to move on from the twice-impeached Trump. They’re concerned his prodigious ability to fundraise could crowd out hard-to-win campaign cash, and that he might use it to fuel battles within the party that could hamper its efforts to regain control of Congress in 2022.

Trump, 74, is endorsing candidates he considers loyal to him and his agenda or are challenging Republicans that crossed him, including those that supported his impeachment. He relaunched an online store this week to sell merchandise, and Trump adviser Jason Miller has said the former president’s Save America political action committee has more than $80 million on hand.

According to the prepared remarks, Trump plans to say the party welcomed “millions upon millions of new voters” into the GOP coalition, and that he transformed the party into one that fights for all Americans.

“The Republican Party will succeed and grow in the future by embracing its destiny as the champion of working-class Americans,” Trump plans to say. “Our administration proved over the past four years that Making America Great Again means putting America First.”