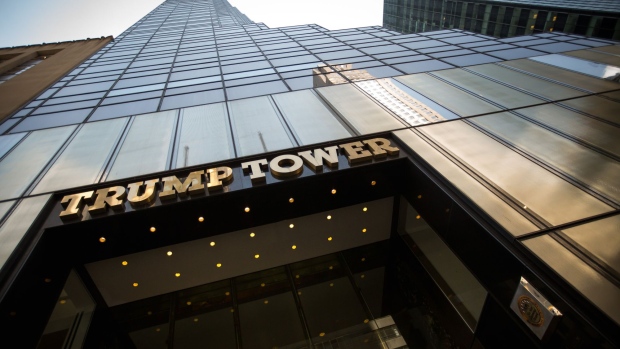 Trump Tower stands in New York, U.S., on Thursday, June 1, 2017. Two Chinese labor activists were reported missing, with a third detained by police, while they were investigating labor violations at a factory that manufactured Ivanka Trump shoes, according to a workers advocacy group. Photographer: Michael Nagle/Bloomberg , Bloomberg

(Bloomberg) -- A $100 million loan on Donald Trump’s Fifth Avenue tower was moved to a watch list Monday because of “lower average occupancy,” according to information compiled by Wells Fargo & Co.

Marc Fisher, whose showroom occupied the 21st floor of Trump Tower, “vacated prior to lease end,” the note said, adding that the Trump Organization is trying to find a replacement. In March, the Trump Organization sued the footwear maker for more than $1 million in unpaid back rent, a claim that was later discontinued, according to court records.

The Trump Organization is far from alone in facing real-estate challenges. The pandemic has battered New York’s office market, sending the vacancy rate soaring and weighing on asking rents. With workers home for months, companies have embraced remote work and hybrid schedules, with some looking to shed space.

The $100 million loan is part of the more than $590 million of debt held by the Trump Organization that comes due within the next four years. More than half of that is personally guaranteed by Trump.