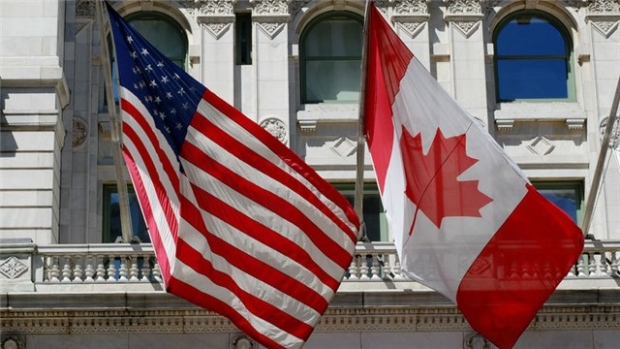 The possibility that U.S. President-elect Donald Trump will follow through on his protectionist campaign promises has dented the outlook for Canada's economy, with nearly half of economists polled paring back growth forecasts.

A majority of analysts who answered an extra question in the poll said they were concerned Trump's expected trade agenda will have a serious impact on Canada's economic growth over the near- to medium-term.

The Bank of Canada is therefore predicted to hold rates steady at 0.50 per cent for much longer than had been anticipated, with analysts pushing out expectations for a hike to the third quarter of 2018, versus the first quarter just a month ago.

Although, in its recent Business Outlook Survey, the bank indicated improved business prospects, economists in the poll said there was too much uncertainty emanating from Trump's threat to scrap the North American Free Trade Agreement (NAFTA).

Canada exports about 75 per cent of its goods to the United States.

"If he rips up NAFTA, it is going to be a pretty harsh blow to Canadian exporters, given that the U.S. is their primary export market," said Nick Exarhos, director at CIBC Capital Markets.

"It would also have severe consequences for business investment as firms could be cautious on expanding capacity."

As the price of oil – a key Canadian export – collapsed in 2014, Bank of Canada Governor Stephen Poloz pinned his hopes on a non-energy export-led rebound in Canada, saying a combination of a weaker domestic currency and stronger U.S. demand would make a potent mix.

Providing some respite, oil prices have risen while the Canadian dollar is expected to weaken against its U.S. counterpart on predictions the Federal Reserve will tighten policy further and the BoC will stay on the sidelines.

Although energy prices could be capped under US$60 a barrel this year, well below their mid-2014 high of US$116, the loonie is likely to close the year around 3 per cent lower than its current level.

But robust demand from the United States could remain a big ask if Trump executes the restrictive policies he has talked about.

Mexico is facing an even worse situation as Trump has pledged to build a border wall and make Mexico pay for it. He has also threatened a hefty border tax, sending the Mexican peso to historic lows.

For Canada, lackluster export growth could increase household borrowing and make a decline in the housing market, where much of the debt is invested, more painful.

An average Canadian household owed US$1.67 for every dollar of disposable income in the third quarter of last year.

Canada's housing market, a major driver of economic growth, is also expected to cool this year due to the government's new mortgage rules.

Economic growth will be 1.9 per cent this year, short of the bank's and October's poll estimate of 2.0 per cent, the poll forecast. It will expand at the same rate in 2018, below the bank's 2.1 per cent projection.

The most optimistic forecast for 2017 in the poll was for a 2.3 per cent expansion in economic activity versus 2.8 per cent expected in October.

Although the Liberal government's fiscal stimulus is likely to lend support to the economy through infrastructure spending this year, economists said there could be a need for more in the event of an external shock.

"Overall, fiscal stimulus from Ottawa is helpful but what is also going to be helpful is the fiscal stimulus in the U.S.," said National Bank of Canada's Krishen Rangasamy.

"We are assuming that common sense will prevail among policymakers and trade flows are going to continue the way they are."

Yet, with overall inflation remaining below the bank's 2 per cent target and the economy still weak, a small minority of economists expects the BOC to cut rates and two of 34 predicted a trim when the bank meets next week. The bank cut twice in 2015 to offset the oil price shock.

With high household debt and weak economic growth, policymakers face a dilemma whether to lower rates to stoke growth or raise them to discourage further borrowing.

Analysts in the poll gave a median 25 per cent probability the next move by the bank would be a rate cut.