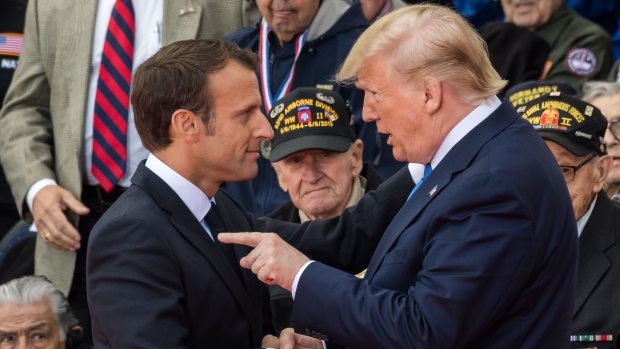 Donald Trump, once the primary critic of NATO, blasted France’s Emmanuel Macron for his “very insulting” comments about the military alliance that’s celebrating its 70th anniversary in London.

The full-throttled attack came on Tuesday, hours before the two leaders were scheduled to meet face-to-face in London.

The U.S. president, who in the past has expressed admiration for the French leader, said Macron was “very disrespectful” when he warned recently of the “brain death” of NATO. The remarks were “very dangerous” and Trump said he could even envision France “breaking off.”

That is quite the turnaround from a president who has roiled previous NATO gatherings by questioning the purpose of the alliance and why others weren’t paying enough into the pot. It also highlights a marked change in what was once Trump’s most important relationship in Europe. At the last NATO summit, it was Germany’s Angela Merkel who endured the verbal attacks.

A French official in Macron’s office said they would not “live comment everything that Trump says.”

About the same time Trump was speaking, Macron from the south of France boasted about France being “the leader” of Europe’s navy as he announced the state’s new order of six sea patrol vessels, Agence France-Presse reported. “We are building a European maritime capacity,” he said, “France has taken the lead.”

It would appear both leaders are girding for confrontation when they sit down this afternoon. France is looking to shake up the military alliance created to provide collective security against the Soviet Union and called for a wholesale review of NATO’s objectives at today’s leaders’ reunion.

Last week, Macron stood by his ‘brain-dead’ comments and said he’d be satisfied if they served as “a wake-up call” to his allies. France has been pushing for Europe to build up its own defense capabilities and a more independent foreign policy, rather than relying on the U.S. and NATO.

The French leader has also alarmed European allies by declaring he wants improved relations with Vladimir Putin despite the aggression in Ukraine that has seen Russia excluded from global forums like the Group of Seven.

The criticism has left Trump in the unusual spot of defending NATO. At past NATO summits, he threatened to withdraw the U.S. from the pact and suggested his country might not abide by the mutual defense agreement at the heart of the alliance over frustrations other countries weren’t spending more.

Trump said Tuesday he was encouraged that other members of the alliance had upped their defense spending closer to the target of at least 2% of each nations’ gross domestic product: “We have increased the numbers the other countries are paying by $130 billion.”

The disagreement extends to trade, where a showdown could have long-lasting economic effects.

Trump defended his administration’s threat to hit around $2.4 billion of French products with tariffs because of a dispute over taxing large technology companies, saying that if “anyone is going to take advantage of American companies, it’s going to be us — not France.”

Minutes later, French Finance Minister Bruno Le Maire said in Paris “we are counting on European solidarity on this. The French tax is not discriminatory.”

France’s government said earlier Tuesday the European Union would retaliate if the U.S. follows through on its tariff threat.

The office of the U.S. Trade Representative said on Monday that France’s digital services tax -- a levy that hits the revenues of large American tech companies including Google, Apple Inc., Facebook Inc. and Amazon.com Inc. -- “discriminates against U.S. companies.” The American tariffs would be imposed after a public comment period concludes in early 2020 and could target sparkling wine, cheeses, handbags and makeup.

Trump said even though he was “not in love” with many of the tech companies -- who he has previously described as politically biased against his campaign -- he still did not “want France taxing American companies.”

He said that tariffs hitting French or European products would ultimately be good for American companies, like Boeing Co.

--With assistance from Jordan Fabian and Jenny Leonard.