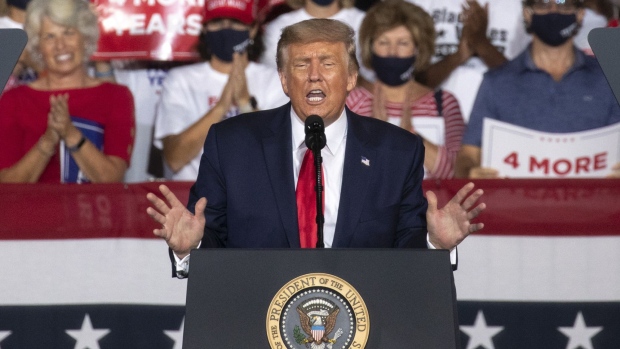 President Donald Trump speaks during a campaign rally in Winston-Salem, North Carolina, U.S., on Tuesday, Sept. 8, 2020. Trump has discussed spending as much as $100 million of his own money on his re-election campaign, if necessary, to beat Democratic nominee Joe Biden, according to people familiar with the matter. Photographer: Logan Cyrus/Bloomberg , Bloomberg

Donald Trump’s bid to focus his re-election campaign on anything but the pandemic hit another setback Wednesday, as the president acknowledged publicly downplaying the threat of the coronavirus in February even though he knew it was dangerous.

Trump confirmed that he’d told journalist Bob Woodward the virus was easily transmitted and far more deadly than the flu at a time he was telling Americans not to worry about an outbreak he said would fade away. The revelation led swiftly to Democratic accusations that Trump had misled or outright lied to the public about the threat posed by the pandemic.

The president, trailing Democrat Joe Biden in polls with the approach of the Nov. 3 election, has repeatedly sought to shift the focus away from the virus as surveys show a majority of Americans disapprove of his handling of the crisis.

Woodward’s book has emerged at a critical moment, in the first week after Labor Day, when political analysts say voters usually begin to turn their attention to the presidential race.

Trump’s comments lay bare a response that relied on rosy messaging over painstaking coordination with states to curb the spread of the virus. They also confirm anxieties that some voters have expressed to pollsters and others: That their leader again and again failed to take seriously a national emergency that has drastically altered their lives.

As the president minimized a threat he privately warned about, his administration lagged in laying out and enforcing measures to effectively slow the spread. And he has repeatedly discounted and contradicted the advice of his health experts, including his own recommendation that people wear a mask.

Trump had little choice but to acknowledge the remarks, which echo a crisis in October 2016 that nearly sank his campaign -- his voice on tape disparaging women to a reporter from the television program “Access Hollywood.”

The president and his administration have spent nearly a week refuting parts of an article in the Atlantic that he had belittled the sacrifices of American soldiers in World War I. That report relied heavily on anonymous sources. Woodward’s book puts Trump’s own words at the center of his latest firestorm.

But on Wednesday, Trump continued his effort to change the conversation after CNN and the Washington Post ran reports describing the contents of the book. He called a news conference to release a list of potential U.S. Supreme Court nominees, should a vacancy arise. The court announcement, and a promise earlier in the day to withdraw more American troops from Iraq, were quickly overshadowed by his comments to Woodward, made in interviews conducted between December and July.

Woodward’s book, entitled “Rage” and to be published this month, refocused public attention on the pandemic that has resulted in more confirmed deaths and cases in the U.S. than anywhere else in the world.

“I wanted to always play it down, I still like playing it down, because I don’t want to create a panic,” Trump told Woodward on March 19.

On Feb. 7, Trump told Woodward that the virus was airborne and easily transmitted, according to the Post.

“It goes through air, Bob, that’s always tougher than the touch,” Trump said. “The air, you just breathe the air and that’s how it’s passed.” He said in the interview that the virus was more deadly “than even your strenuous flus.”

Trump on Wednesday defended the gap between his comments to Woodward versus his public remarks.

“The fact is I’m a cheerleader for this country, I love our country,” Trump said at the White House on Wednesday, where his announcement of high court choices -- a red-meat issue for his base -- quickly gave way to questions about the book. “I don’t want people to be frightened, I don’t want to create panic, as you say. Certainly, I’m not going to drive this country or the world into a frenzy.”

Were it not for his leadership, Trump said, the U.S. death toll would be far higher than the current 190,000.

Even as he tries to cast himself as the law-and-order president in response to sometimes violent protests around the country over racism and police brutality, Trump finds himself at the center of a fresh round of virus coverage.

Biden, who has been arguing for months that Trump mismanaged the virus and cost American lives, seized on the development.

“He knew how dangerous it was,” Biden said Wednesday in Warren, Michigan. “And while this deadly disease ripped through our nation, he failed to do his job on purpose. It was a life-and-death betrayal of the American people.”

In an interview with CNN, Biden said Trump wanted to make sure “the stock market didn’t come down, that his wealthy friends didn’t lose any money, and that he could say anything, that in fact anything that happened had nothing to do with him.”

The president “waved a white flag. He walked away. He didn’t do a damn thing,” Biden added. “Think about it. Think about what he did not do -- it’s almost criminal.”

A Biden official said the campaign was likely to run ads using material from the book, including the audio of Trump admitting to downplaying the severity of the virus to the American people.

The Woodward book overshadowed another development that might otherwise have dominated Wednesday’s headlines: A whistle-blower complaint accusing Trump appointees of suppressing intelligence on Russian election interference and the threat from white supremacists.

It’s the virus, though, that has hobbled the economy -- otherwise Trump’s strongest selling point -- and detracted from his support. A Monmouth University poll released Wednesday showed that 56 per cent of Americans disapprove of his response to the pandemic.

Biden has sought to make the election a referendum on Trump’s handling of the virus, both criticizing the president but also drawing contrasts, with social distancing at campaign events and more regularly wearing a mask.

Trump’s campaign has tried to respond, coming out this week with a television ad in swing states that attacks Biden for saying that he would shut down the economy again if scientists said it was necessary.

Woodward’s book includes a series of explosive or unflattering comments or assertions, based in part on on-record interviews and background conversations with officials who aren’t identified.

He reports that Trump was warned by National Security Advisor Robert O’Brien in a Jan. 28 meeting that the virus “will be the biggest national security threat you face in your presidency,” according to the Post, which said it obtained a copy in advance of publication.

“This is going to be the roughest thing you face,” O’Brien said, according to Woodward, who wrote that Trump’s head popped up at the dire warning. Trump told Woodward in May that he didn’t remember being told that.

Trump restricted travel from China shortly after. “The risk of infection for Americans remains low,” his health secretary, Alex Azar, said on Jan. 31.

The book also said that U.S. infectious disease expert Anthony Fauci told unnamed people that the White House had “rudderless” leadership. “His attention span is like a minus number,” Fauci said, according to the Post’s account of Woodward’s book. “His sole purpose is to get re-elected.”

Late Wednesday night, Trump responded to the latest threat to his re-election with a tweet:

“For years Fake stories and investigations, then the phony Russia, Russia, Russia HOAX, next Ukraine and the failed Impeachment, now the crummy Atlantic Magazine’s MADE UP STORY, and lastly, the political hit job by rapidly fading Bob Woodward and his boring book. It never ends!”