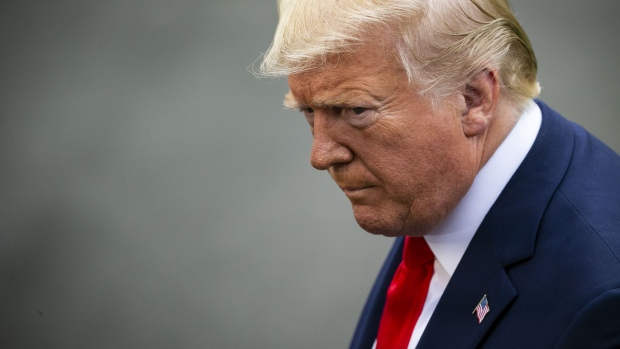 (Bloomberg) -- President Donald Trump pressed then-Secretary of State Rex Tillerson to help persuade the Justice Department to drop a criminal case against an Iranian-Turkish gold trader who was a client of Rudy Giuliani, according to three people familiar with the 2017 meeting in the Oval Office.

Tillerson refused, arguing it would constitute interference in an ongoing investigation of the trader, Reza Zarrab, according to the people. They said other participants in the Oval Office were shocked by the request.

Tillerson immediately repeated his objections to then-Chief of Staff John Kelly in a hallway conversation just outside the Oval Office, emphasizing that the request would be illegal. Neither episode has been previously reported, and all of the people spoke on condition of anonymity due to the sensitivity of the conversations.

Zarrab was being prosecuted in federal court in New York at the time on charges of evading U.S. sanctions against Iran’s nuclear program. He had hired former Attorney General Michael Mukasey and Giuliani, who has said he reached out repeatedly to U.S. officials to seek a diplomatic solution for his client outside the courts.

The president’s request to Tillerson -- which included asking him to speak with Giuliani -- bears the hallmarks of Trump’s governing style, defined by his willingness to sweep aside the customary procedures and constraints of government to pursue matters outside normal channels. Tillerson’s objection came to light as Trump’s dealings with foreign leaders face intense scrutiny following the July 25 call with Ukraine’s president that has sparked an impeachment inquiry in the House.

The episode is also likely to fuel long-standing concerns from some of Trump’s critics about his policies toward Turkey and his relationship with its authoritarian president, Recep Tayyip Erdogan. Zarrab’s release was a high priority for Erdogan until the gold trader agreed to cooperate with prosecutors in New York.

It isn’t clear whether Trump considered his request for Tillerson to intervene to be improper or was just testing the bounds of what he could do as president on an issue that could provide diplomatic benefits while also helping Giuliani, a longtime supporter. The Oval Office meeting occurred in the second half of 2017 and Giuliani wasn’t the president’s personal lawyer at the time, as he is now.

In a phone interview this month, Giuliani initially denied that he ever raised Zarrab’s case with Trump but later said he might have done so. He said he’d been speaking with U.S. officials as part of his effort to arrange a swap of Zarrab for Andrew Brunson, an American pastor jailed in Turkey who was later released in 2018.

“Suppose I did talk to Trump about it -- so what? I was a private lawyer at the time,” Giuliani said. “Maybe I’m wrong. Maybe at some point I dropped his name in a conversation. Or maybe one of his people talked to him about it because I was trying to do a prisoner swap.”

Giuliani said he discussed the Zarrab case with State Department officials and disclosed that two years ago, although he declined to say if he ever spoke directly to Tillerson about the case, saying “you have no right to know that.”

Concerns about Trump’s close alliance with Erdogan were exacerbated this week after Trump abruptly announced on Sunday that he would clear U.S. troops from the path of a planned Turkish invasion in northeast Syria. The weekend announcement drew quick criticism from top Republican lawmakers, who said it endangered Kurdish forces the U.S. relied on to defeat Islamic State. Those Kurdish-led forces are now under attack.

Trump followed his weekend decision with an announcement Tuesday that he has invited Erdogan to the White House in November.

As he was with Ukraine, Giuliani was so steeped in events in Turkey that State Department officials grew increasingly alarmed. Earlier in 2017, he had traveled to the country and met with Erdogan as part of his effort to seek a resolution in Zarrab’s case.

He and Mukasey said in a letter to the judge in Zarrab’s case that they notified then-Attorney General Jeff Sessions of their plans before holding a meeting with Erdogan.

Erdogan repeatedly spoke with Trump and, before 2017, Obama administration officials about Zarrab’s case when it was before the Southern District of New York as part of a broader investigation into a scheme to evade sanctions on Iran.

At one point, the State Department under Tillerson got involved in discussions over possibly swapping Zarrab for Brunson, the jailed pastor, but the matter was eventually dropped because Turkey kept escalating its demands, according to another person familiar with the timeline of events.

Tillerson has said publicly that the president frequently asked him to do things that were illegal.

“So often, the president would say ‘Here’s what I want to do and here’s how I want to do it,’ and I would have to say to him, ‘Mr. President I understand what you want to do but you can’t do it that way,”’ Tillerson said in an on-stage interview with Bob Schieffer in Texas last year. “It violates the law, it violates treaty you know and he just, he got really frustrated when we’d have those conversations.”

Zarrab, a one-time gold trader in his mid-30s, had lived an opulent lifestyle in Turkey, with a private plane, yacht and a Turkish pop-star wife. After his arrest in early 2016, prosecutors alleged he had “close ties” with Erdogan. They accused Zarrab of using his network of companies to move money through the U.S. financial system to help Iran evade sanctions as the U.S. was stepping up economic pressure on the country.

Zarrab later pleaded guilty and testified against Mehmet Hakan Atilla, who headed international banking at state-owned Turkiye Halk Bankasii AS, known as Halkbank. Zarrab said Erdogan knew of and supported the laundering effort on behalf of Iran. Erdogan and other senior Turkish officials repeatedly rejected the accusations, saying they were fabrications.

Atilla was eventually convicted of helping Iran evade economic sanctions on billions of dollars of oil revenue and served 28 months in U.S. prison before returning to Turkey in July to a hero’s welcome. Turkey has so far managed to avoid U.S. penalties over the sanctions-evasion scheme.

Despite Erdogan’s demands and Giuliani’s efforts, Zarrab was never sent back to Turkey. Once he agreed to testify, he was moved to a county jail for safekeeping, and he stayed there until after Atilla’s trial was over. By then, Zarrab’s home and assets in Turkey had been seized by Erdogan.

--With assistance from Jennifer Jacobs.