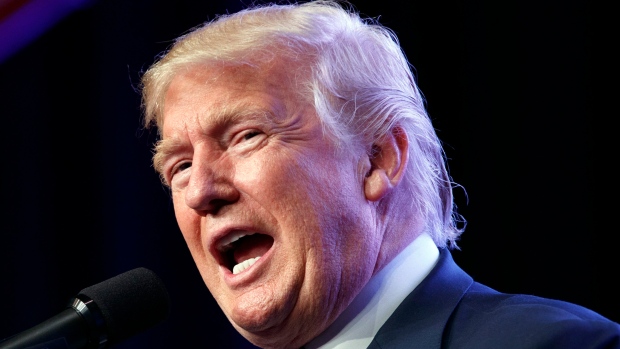 In this Sept. 16, 2016 file photo, Republican presidential candidate Donald Trump speaks during a campaign rally in Miami. The 2016 campaign for president reaches what may be a decisive milestone: the first debate between Hillary Clinton and Donald Trump. This is an analytical reader that should largely stand until mid-afternoon, with updates on merits in the event of breaking news. , AP Photo/ Evan Vucci, File

A Donald Trump win in the U.S. presidential election in November would be "net positive" for the Canadian economy and Canadian stocks, given his pro-oil platform and proposals for lower tax rates, according to a new RBC Capital Markets report.

“We would be very cautious with those who suggest that markets will crash and dogs and cats will live together upon a Trump victory as these types of stories often sell newspapers, but have little connection to reality,” Matthew Barasch, Canadian equity strategist with RBC Capital Markets, wrote in the note to clients.

Barasch’s report comes as the Republican candidate prepares to go head-to head with former U.S. secretary of state and Democrat Hillary Clinton in their first presidential debate on Monday.

Barasch said Trump’s proposed tax cuts – in the near term, at least – would probably deliver a “big boost” to the U.S. economy, with a “fairly meaningful” impact for Canadian GDP as a result of the two countries’ trade relations.

Overall, Barasch believes Trump’s policies would lead to higher long-term interest rates as economic growth and budget deficits increase. The resulting steeper yield curve, combined with “less onerous” regulations in the event of a Republican win, would provide a boost to banks and life insurance firms.

Energy and material sectors would also benefit from a Trump presidency, as the Republican candidate has vowed to revive the Keystone XL pipeline project, Barasch said.

Trump’s plans for increased infrastructure spending could also fuel industrial stocks like railways, Barasch said. He expects that any changes to U.S. immigration rules could increase the flow of talent to Canada, which would boost the technology sector north of the border.

However, Trump’s vow to renegotiate NAFTA, reject the Trans-Pacific Partnership and raise trade tariffs on Chinese goods pose a threat to economic growth – and could hurt Canada in the long run, Barasch said.

“Any move to roll back NAFTA would weigh on [consumer staples and discretionary stocks] that rely on significant access to the U.S. market, with auto parts a notable standout,” Barasch wrote.