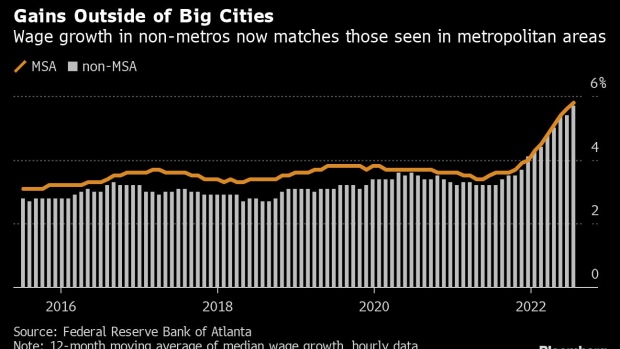 'I Voted' stickers at a polling location in Fairfax, Virginia, U.S., on Tuesday, Nov. 2, 2021. Virginia's gubernatorial contest between Terry McAuliffe and Glenn Youngkin will offer the clearest picture yet of how much momentum Republicans have heading into 2022 elections that will decide control of Congress. Photographer: Stefani Reynolds/Bloomberg , Bloomberg

(Bloomberg) -- The pandemic has redrawn the political map of the US economy as the country heads into November’s midterm vote, with regions that voted for Donald Trump two years ago generally posting a stronger recovery than Democratic strongholds, according to an analysis by the Economic Innovation Group.

Trends like the shift to work-from-home and migration out of expensive cities have helped to boost formerly struggling areas -- including rural ones -- which lean toward voting Republican. Counties carried by Trump are much closer to recouping all their pandemic job losses than the ones that voted for President Joe Biden, the study found. It’s based on local employment data from the Bureau of Labor Statistics.

The report also showed that so-called purple states, where both parties have a shot at winning, have had the strongest job recoveries of all -- though they also tend to have the highest inflation rates.

“This cycle’s most contested elections are taking place in some of the hottest state economies,” author Kenan Fikri wrote.

Big cities that vote more heavily for Democratic candidates were harder hit by pandemic job losses. Moreover, while average earnings still tend to be much higher in urban areas, wage gains for people living outside metropolitan areas -- which have long lagged behind the cities -- are now matching them.

The continued weak recovery of business districts is the main reason for the slower recovery in Biden-supporting regions.

“Much of the downtown economy simply disappeared with the pandemic and rise of remote work,” Fikri wrote.

One back-to work index, which measures how often workers go to the office relative to their pre-pandemic habits, is still below 50%. A report by the Institute of Governmental Studies at the University of California, Berkeley, which compared mobile-phone data from 2019 and 2022 for major cities, also found a slump in activity for most downtown areas in North America.