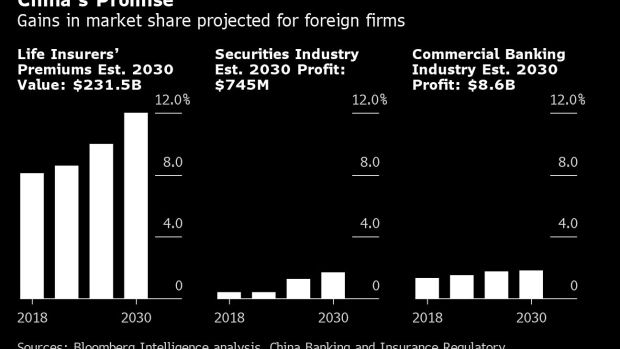 WASHINGTON, DC - MAY 27: U.S. President Donald Trump returns to the White House on May 27, 2020 in Washington, DC. Trump traveled to Florida to watch the SpaceX launch of two U.S. astronauts to the International Space Station, but the launch was canceled due to poor weather. (Photo by Win McNamee/Getty Images) , Photographer: Win McNamee/Getty Images North America

(Bloomberg) -- It’s only a matter of time before the Trump administration hits China over a range of grievances. The question for CEOs, investors and economic policy makers is how bad things will get.

U.S. lawmakers moved on two fronts Wednesday, with Secretary of State Michael Pompeo declaring Hong Kong no longer autonomous from China and the House of Representatives authorizing sanctions against Chinese officials for abuses against Muslim minorities. Other bills in the pipeline would target Huawei Technologies Co., Chinese companies listed in the U.S. and banks that do business with Chinese officials who interfere in Hong Kong’s affairs.

President Donald Trump has numerous policy options, from sanctions on officials and businesses to effectively treating Hong Kong no differently from the Chinese mainland. The worst-case scenarios have potentially massive implications, and China has vowed to strike back.

Investors have so far taken rising tensions in their stride, pushing global share prices to the highest levels since early March on optimism over unprecedented government stimulus and an easing of coronavirus lockdowns. But that doesn’t mean markets are flashing the all-clear sign.

China’s yuan tested a record low in offshore trading on Wednesday, while Hong Kong’s $4.9 trillion equity market is valued at its most depressed level relative to global shares since the Asian financial crisis in 1998. Apple Inc., which is highly dependent on China’s consumers and contract manufacturers, has seen its stock lag behind the S&P 500 Index in recent weeks.

“What would be most worrying to me is if the U.S. and China really turn their tensions into a full-blown financial war -- devaluing the currency, limiting funding, blocking listings,” said Li Changmin, managing director at Snowball Wealth in Guangzhou.

Hong Kong’s Hang Seng Index could fall more than 10% to a nearly four-year low in the coming months if tensions escalate, said Cliff Zhao, head of strategy at CCB International Securities Ltd. While Hong Kong’s currency is near the strong end of its trading band against the dollar, speculators are betting on significant depreciation.

A return to tit-for-tat retaliation between Washington and Beijing would not only jeopardize their recent trade deal, but also spill over to the world economy at a time when it’s showing tentative signs of recovery from the biggest contraction since the Great Depression.

If Trump decides to pursue some of his more extreme policy options for Hong Kong, both China and the U.S. could pay a heavy price. The city is a major transshipment hub, exporting HK$304 billion ($39 billion) of goods to America in 2019. Hong Kong also offers U.S. companies a relatively safe way to access the Chinese market and employs a U.S. dollar peg, linking it with America’s financial system. Some 290 U.S. companies had regional headquarters in the city as of 2018 and another 434 had regional offices, according to the Congressional Research Service.

Meanwhile, China still relies on Hong Kong as its primary gateway to the global economy. About 53% of the country’s $1.18 trillion in non-financial investments flowed through Hong Kong in 2018, and China’s state-owned banks have about 7% of their assets in the city. Hundreds of China-domiciled companies have Hong Kong listings, including national leaders such as Alibaba Group Holding Ltd. and PetroChina Co. Chinese companies have raised more than $100 billion from Hong Kong share issuance since 2015, with firms including JD.com Inc. and NetEase Inc. preparing for blockbuster secondary listings next month.

The threat of U.S. sanctions is likely to spur capital outflows from Hong Kong, said Tommy Wu, a senior economist at Oxford Economics. “It also raises the question as to whether foreign corporates are still willing to use Hong Kong as a regional headquarters, or if they will allow their cash or capital to sit in Hong Kong,” he said.

Almost all of the world’s biggest banks and asset managers have a presence in Hong Kong, but they’re also increasingly turning to mainland China as their next big source of growth. While there’s little indication thus far that Beijing will renege on promises to open China’s domestic financial markets to foreign competition, the risk would be hard to ignore if tensions worsen.

For Wall Street banks, the stakes are massive. Goldman Sachs Group Inc. has estimated that China’s brokerage industry alone will generate $47 billion of profit by 2026, with foreign securities firms seeking to grab a sizable portion. Wealth managers such as BlackRock Inc. and Vanguard Group Inc. are also jumping into the Chinese market, where assets under management are forecast by Oliver Wyman, a consultancy, to reach $30 trillion over the next few years.

In one ominous sign for the industry, a body advising the U.S. Congress this week questioned Wall Street’s push into China, saying lawmakers need to “evaluate the desirability of greater U.S. participation in a financial market that remains warped by the political priorities of a strategic competitor.”

Chinese banks could also become bargaining chips. Two U.S. senators are proposing legislation to punish Chinese entities involved in enforcing proposed new security laws in Hong Kong and to penalize banks that do business with those entities. The nuclear option would be to “block Chinese banks from the U.S. dollar clearing system,” though that’s unlikely at this stage, according to Enodo Economics.

Non-financial companies also have a lot to lose. When the U.S. announced further curbs on Huawei this month, Hu Xijin, the editor of the Communist Party’s Global Times newspaper, tweeted that China would retaliate using an “unreliable entities list” that it first threatened at the height of the trade war last year.

While China never said which companies were on the list, the Global Times has cited a source close to the Chinese government as saying U.S. bellwethers such as Apple and Qualcomm Inc. could be targeted. Boeing Co., which recorded $5.7 billion of revenue from China in 2019, and Tesla Inc., the biggest U.S. carmaker operating independently in China, are among companies most exposed to a further souring of relations.

In Hong Kong, tycoons who’ve long been viewed as being close to Beijing could be particularly vulnerable as they look for assets made cheap by the pandemic. This week, Li Ka-shing’s CK Hutchison Holdings Ltd. lost a bid to build and operate Israel’s biggest desalination plant, days after the U.S. asked the country to review potential security threats posed by China-based companies. If Trump moves to curb exports of sensitive technologies to Hong Kong, the city’s high-tech firms will also suffer, said Tianlei Huang, research analyst at the Peterson Institute for International Economics.

Anyone trying to pick stocks in China and Hong Kong would do well to stick with companies that are more geared toward the domestic market -- like Alibaba and Tencent Holdings Ltd. -- and avoid businesses exposed to U.S.-China wrangling over semiconductors and the technology supply chain, according to Alvin Cheung, associate director with Prudential Brokerage Ltd. in Hong Kong.

“Sino-U.S. relations will likely remain difficult before the U.S. presidential election and Hong Kong will be caught in the middle of that spat,” Cheung said. “It’s going to be a bumpy road ahead and investors should prepare themselves for huge volatility.”