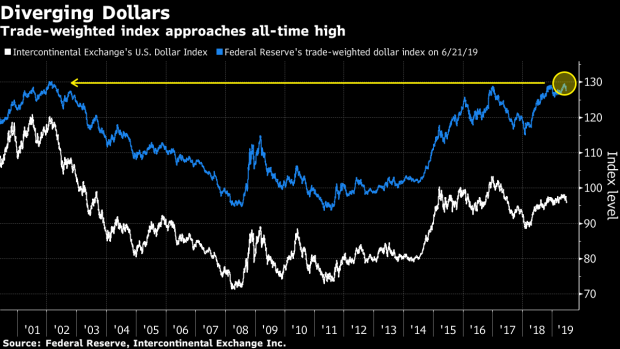 (Bloomberg) -- President Donald Trump wants a weaker dollar to help boost exports, and is counting on the Federal Reserve to help make that happen. But the central bank’s chairman, Jerome Powell, has made clear it’s not his job.

It’s a new twist in the broader pressure campaign the president has brought to bear on Powell to cut interest rates to energize the stock market and fuel growth.

Trump’s focus on the dollar surfaced last week after the European Central Bank said it might ease policy, prompting the euro to drop against the dollar. Trump seized on the move to say on June 18 that the Fed’s failure to lower rates was putting U.S. exporters at a competitive disadvantage. He later mused on June 26 he’d rather have ECB President Mario Draghi running the Fed.

Powell, once again, is finding himself on the defensive, trying to shield the Fed from political influence. He deflected Trump’s calls back at the administration.

“The Treasury Department -- the administration -- is responsible for exchange rate policy -- full stop,” Powell said June 25 in response to a question from the audience after a speech in New York. “We don’t comment on the level of the dollar. We certainly don’t target the level of the dollar. We target domestic economic and financial conditions as other central banks do.”

Trump has explored options for removing or demoting Powell over the Fed’s interest rate decisions, which the president says have hampered growth. And the currency comments offer yet another point of tension between the world’s most powerful leader and its most influential central banker.

Last week, Trump accused both Europe and China of weakening their currencies to gain a competitive advantage. Some Wall Street banks are questioning whether the U.S. might intervene in currency markets.

“Make no mistake about it, what Draghi and other central banks are doing is the same as what China is doing -- weakening their currencies,” said Dan DiMicco, who was an adviser to Trump’s campaign and presidential transition and now sits on an administration trade advisory committee.

The Trump administration has from the start deviated from a 20-year-old policy that a strong dollar was in the nation’s best interest. Treasury Secretary Steven Mnuchin said in 2017 that an “excessively strong dollar” could have negative effects on the American economy, and Trump has made similar comments since taking office.

“The repeated, intense comments by the president lead me to believe that we’re no longer pursuing a strong dollar policy,” said Nathan Sheets, chief economist for PGIM Fixed Income and a former Treasury official from the Obama administration. “This is a distinct, new chapter in U.S. currency management and strategy.

The strong-dollar mantra was developed by then-Treasury Secretary Robert Rubin in 1995. Underpinning it is the view that a robust currency reflects a healthy economy and bolsters foreign demand for U.S. debt by reducing the prospect of currency losses. While a stronger dollar helps American consumers by lowering the cost of imports, it also compounds manufacturers’ struggles by making exports less competitive.

Trump and Warren’s ideas “very much could trigger a currency war,” said Fred Bergsten, an economist and author of “The Dollar’s Dilemma.”

But those who advocate that a weaker dollar is better for the U.S. say that former President Ronald Reagan’s administration was able to do it in the 1980s without destroying faith in the greenback.

In 1985, the U.S. worked with five countries, including Germany and Japan, to weaken the dollar in what was called the Plaza Accord. But such a deal is unlikely under the Trump administration, a senior White House official said.

“Our standing internationally is so weak and incoherent that the U.S. can’t pull something like this off,” said Steve Hanke, an economist at Johns Hopkins University.

Yet Trump believes that countries manipulate their exchange-rate through monetary policy, said the official, which is why the president is turning to the Fed for help.

--With assistance from Katia Dmitrieva, Jennifer Jacobs and Rich Miller.

To contact the reporters on this story: Saleha Mohsin in Washington at smohsin2@bloomberg.net;Katherine Greifeld in New York at kgreifeld@bloomberg.net

To contact the editors responsible for this story: Alex Wayne at awayne3@bloomberg.net, Joshua Gallu, John Harney