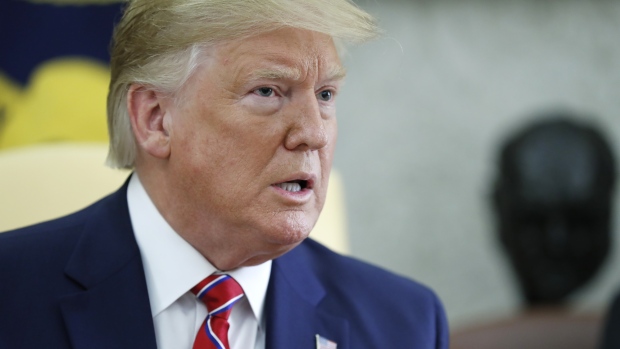 U.S. President Donald Trump, right, speaks during a meeting with Andrzej Duda, Poland's president, not pictured, inside the Oval Office of the White House in Washington, D.C., June 12, 2019. Bloomberg/Shawn Thew

President Donald Trump said that if Mexico doesn’t cut migration to the U.S. under a deal the two countries reached last week, they’ll enter “phase two,” which he described as “a much tougher phase.”

Trump, appearing at the White House on Wednesday with Poland’s President Andrzej Duda, didn’t elaborate on what could unfold in the next phase.

Trump on Friday said he was suspending plans for tariffs on Mexico that he’d been threatening to impose starting this week after the country promised new steps to stem an influx of illegal migration into the U.S. Trump now says he thinks the agreement will mean “a lot fewer people coming up.”

Mexican Foreign Minister Marcelo Ebrard said his country has 45 days to show the U.S. that additional measures aren’t needed under the agreement.

Trump’s patience for the deal with Mexico depends on a quick drop in migration across the U.S. border -- something his own administration and political allies see as an unrealistic expectation. This raises the prospect that the president’s frustration over immigration will soon reignite, possibly prompting renewed tariff threats against Mexico.

On Tuesday, Trump waved a piece of paper at reporters at the White House, claiming it was a page of a secret annex to his agreement with Mexico. He didn’t provide details. Acting White House Chief of Staff Mick Mulvaney said separately at a conference in Washington that the deal relates to asylum and would be put in place if the immigration agreement doesn’t stem the flow of undocumented migrants to the U.S.

A photo of the page Trump was holding, taken by the Washington Post, said that if the U.S. determines not enough has been been done after 45 days “the Government of Mexico will take all necessary steps under the domestic law to bring the agreement into force.” The language in the photo didn’t specify how that would be accomplished but vaguely refers to “burden-sharing” related to refugees.

Ebrard said Tuesday there is no secret deal. He said that if migration into the U.S. isn’t reduced, the White House wants his country to accept asylum applications from Central Americans instead of allowing them to apply across the border, a measure that would require the approval of Mexico’s senate.

As part of the deal with the U.S., Mexico has started deploying national guard troops to its border with Guatemala, Ebrard said Wednesday.

At a news conference Wednesday afternoon, Trump said the deal with Mexico came about because of his tariff threat. ``You would never have had that deal'' without the threat, he said at the White House.

Trump also said that ``we have a lot of strength in 45 days if we decide to use it.''

Mexico says about 600,000 migrants traveled through the country to the U.S. border between January and May. U.S. border officials apprehended about 133,000 people at the border in May, triple the amount from a year earlier though still below historic highs.

U.S. Customs and Border Protection officials have said it’s a crisis that’s straining resources, while Trump and other Republicans have demanded Congress change the law to allow people to be held longer, and for asylum claims to be filed abroad.

Many of the migrants are families fleeing through Mexico from Guatemala, Honduras and El Salvador. The migration surge is partially explained by problems in coffee growing areas of Central America, Ebrard said.