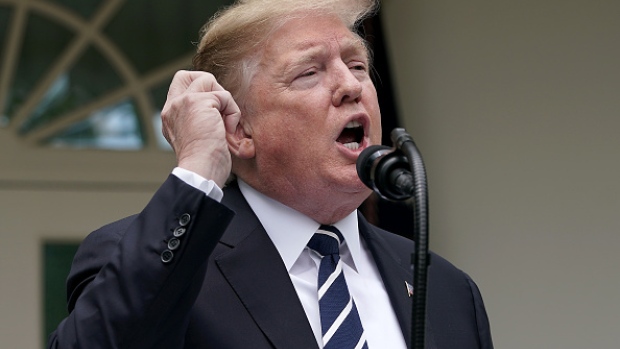 WASHINGTON, DC - MAY 22: U.S. President Donald Trump pretends to make a phone call while speaking about Robert Mueller's investigation into Russian interference in the 2016 presidential election in the Rose Garden at the White House May 22, 2019 in Washington, DC. Trump responded to House Speaker Nancy Pelosi saying he was engaged in a cover up. (Photo by Chip Somodevilla/Getty Images) , Photographer: Chip Somodevilla/Getty Images North America

President Donald Trump, gearing up for the official start of his 2020 campaign, warned that the U.S. would face an epic stock market crash if he’s not re-elected.

“If anyone but me takes over,” Trump told his 61 million Twitter followers on Saturday, “there will be a Market Crash the likes of which has not been seen before!”

The Trump Economy is setting records, and has a long way up to go....However, if anyone but me takes over in 2020 (I know the competition very well), there will be a Market Crash the likes of which has not been seen before! KEEP AMERICA GREAT

Trump officially starts his 2020 campaign on Tuesday with a rally in Orlando, Florida, and appears to be road-testing some of the themes he’ll be touching on in the next 18 months, including stoking fear of a market meltdown. “Tuesday will be a Big Crowd and Big Day,” he said in another tweet.

The president has claimed several times this year and as recently as Friday in a “Fox & Friends” interview that the U.S. stock market would be 5,000 to 10,000 points higher if the Federal Reserve hadn’t raised interest rates four times in 2018.

He also tweeted in February that “had the opposition party” won in 2016, “the Stock Market would be down at least 10,000 points by now” -- an unprovable assertion. And in January Trump suggested that if “you want to see a Stock Market Crash, Impeach Trump.”

Research by Macrotrends shows the Dow Jones Industrial Average’s performance so far in Trump’s term has been middling compared with his predecessors, and trails the gains made under Democrats Barack Obama and Bill Clinton. It’s a touch above the gains logged under Republicans Ronald Reagan and George H. W. Bush; George W. Bush had presided over a losing market at this point in his first term.

The benchmark S&P 500 index made a record high in early May before slipping in the face of Trump’s stepped-up trade war with China. The more narrow DJIA, whose performance Trump likes to reference, last peaked more than eight months ago, on Oct. 3.

Read more: Trump Unleashed Animal Spirits and Then He Crushed Them

The Dow posted 71 record high closes in 2017, starting within a week of Trump’s inauguration, and another 15 in 2018, helped by the passage of a Republican tax bill.