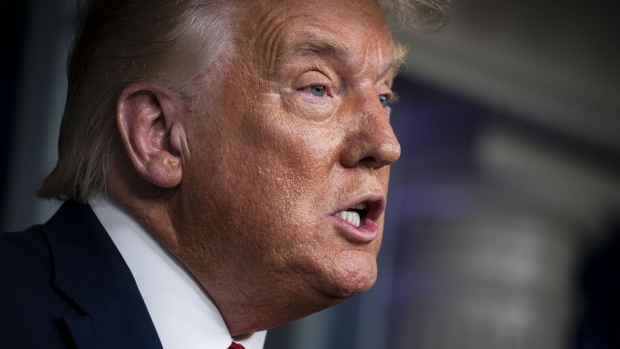 President Donald Trump has discussed spending as much as $100 million of his own money on his re-election campaign, if necessary, to beat Democratic nominee Joe Biden, according to people familiar with the matter.

The billionaire president has talked about the idea with multiple people, though he hasn’t yet committed to any self-funding, according to people briefed on internal deliberations. Though Trump personally contributed $66 million to his 2016 campaign, it would be unprecedented for an incumbent president to put his own money toward winning a second term.

“If I have to, I would,” Trump said Tuesday of putting money into his campaign. “But we don’t have to,” he told reporters as he departed Joint Base Andrews outside Washington for a speech in Florida.

He said he would spend “whatever it takes,” if he winds up self-funding.

Trump has sought advice about whether he should self-fund as he scrutinizes heavy spending by his team earlier this year that failed to push him ahead of the former vice president in the polls. In addition, Biden’s campaign and associated Democratic entities have recently raised more than Trump and his allies.

Tim Murtaugh, a Trump campaign spokesman, declined to say whether there’s been any consideration of using the president’s personal fortune to help fund his re-election effort.

“President Trump’s fundraising is breaking records and we are paying close attention to the budget, allowing us to invest twice as much from now until Election Day than we did in 2016,” Murtaugh said in an email. “President Trump has also built the world’s greatest digital fundraising operation, a dominant ground game, and a third advantage Joe Biden can never match -- enthusiasm.”

Earlier Tuesday, Trump said on Twitter that his campaign had to spend “a lot of money” to combat what he called “false reporting” on his handling of the coronavirus outbreak. Most Americans disapprove of his management of the pandemic, polls have shown.

My Campaign spent a lot of money up front in order to compensate for the false reporting and Fake News concerning our handling of the China Virus. Now they see the GREAT job we have done, and we have 3 times more than we had 4 years ago - & are up in polls. Lots of $’s & ENERGY!

Trump’s re-election effort, including the Republican National Committee, has spent more than $800 million so far, while Biden and the Democratic National Committee spent about $414 million through July, according to financial reports.

But Biden and the DNC raised $365 million in August, shattering a previous record one-month record of $193 million set by Barack Obama in 2008. Biden had $294 million in cash on hand at the end of July, about $6 million less than Trump’s re-election effort.

Trump and the RNC have yet to release their fundraising numbers for August. They said they raised $76 million during the four days of the Republican National Convention last month.

Trump’s advisers have mixed views on the president doing any self-funding, with some saying that his re-election effort has enough cash and that he doesn’t need to dip into his personal fortune. The campaign will have twice as much money as it had in 2016, and new outside groups are starting to spend as well, one person familiar with campaign planning said.

It’s unclear how quickly Trump could come up with $100 million for his campaign. His net worth has declined $300 million in the past year to $2.7 billion, erasing 10% of his fortune since he took office, according to the Bloomberg Billionaires Index.

Trump had between $46.7 million and $156.5 million in various savings, checking and money market accounts at the end of 2019, according to his most recent financial disclosure. Government officials disclose the value of their assets in broad ranges.

He listed 20 assets as being worth more than $50 million, the highest value on the disclosure, including signature properties like his Mar-a-Lago resort in Palm Beach, Florida, his golf clubs and the Trump International Hotel in Washington. He also listed debts of at least $315 million, including mortgages on Trump Tower in New York and his Washington hotel.

Trump’s former campaign manager, Brad Parscale, has drawn criticism for spending during his tenure. The New York Times reported Monday that Trump’s re-election effort faces a “cash crunch” with less than 60 days before the election.

The Trump campaign spent $40 million airing ads on broadcast and cable television in May and June, according to Advertising Analytics. At the time, the president’s support began to fall in polls amid the coronavirus pandemic and protests over racial injustice sparked by the death of George Floyd while in the custody of Minneapolis police.

Bill Stepien, who took over as campaign manager from Parscale in July, has sought to rein in expenses and volunteered to take a pay cut when he was promoted, according to people familiar with the matter.

The Associated Press reported last week that the Trump campaign had pulled much of its TV advertising, allowing Biden’s team to outspend the president by more than 10-to-1 on the air. The Trump campaign’s decision to halt most ads during the summer was part of Stepien’s strategy to focus on key states, and to rely on free media attention during the Democratic and Republican conventions, a campaign aide told Bloomberg News.

Through July, Trump’s campaign committee had spent about 71% of the money it raised, Federal Election Commission filings show. Biden, who had to compete in a crowded primary field before securing the nomination, spent 70% of the money he raised.

Those figures do not include money raised but not distributed by the candidates’ joint fundraising committees, which take donations for both their campaigns and their parties. Those committees next report to the FEC on Oct. 15.