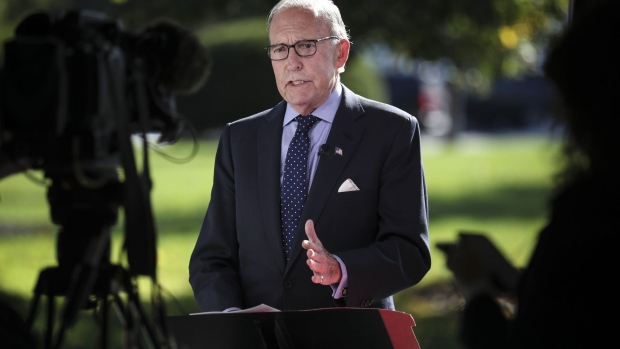 Larry Kudlow, director of the U.S. National Economic Council, speaks during a television interview outside the White House in Washington, D.C., U.S., on Friday, Oct. 2, 2020. , Bloomberg

President Donald Trump’s administration has no plans to release a second-term tax plan before the election, White House economic adviser Larry Kudlow said, despite promises that voters would get a detailed look at his agenda.

The president’s aides are “deep into discussions” about further tax cuts if Trump wins another term on Nov. 3, but there’s no need to lay out policy specifics, Kudlow said Monday in an interview with Fox News.

“Look, we’ve put out a lot. We’ve mentioned it. I’ve talked about it,” he said. “I don’t see any reason why we have to put out a detailed plan.”

That’s a reversal of what Kudlow said in January, when he promised Trump’s plan would be released by late summer to use as a campaign pledge.

Trump has repeatedly said that he wants to pass another bill to cut taxes for the middle class and provide incentives for companies that bring back jobs from China, but he has yet to say what that plan would do.

The Trump campaign in August released a bulleted wish list of ideas for a second term that included items such as “Cut Taxes to Boost Take-Home Pay” and “Create 10 Million New Jobs in 10 Months.” The campaign hasn’t detailed how it would go about achieving those goals.

Kudlow also said he is working on plans for trade, deregulation and energy independence.

It’s unlikely that Trump will have the political support on Capitol Hill to approve another tax bill. Trump would need Republican majorities in both the House and Senate. Democrats are favored to hold and potentially expand their House majority and have a shot at gaining a narrow Senate majority. Senate Republicans have also bucked Trump’s tax ideas in recent months, refusing to consider a payroll tax cut as a stimulus measure to combat the economic fallout from the coronavirus pandemic.