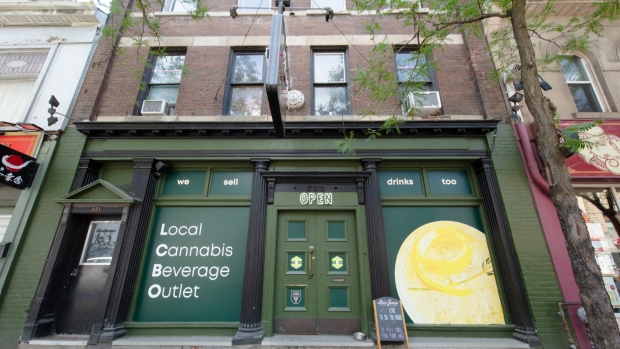 As the cannabis drink market struggles to take off in Canada, Truss Beverages Inc. is borrowing a page from the alcohol industry in order to better inform people as to where they can buy the infused beverages.

The marketing campaign comes as Truss and other infused drink makers such as Canopy Growth Corp. and Tilray Inc. see cannabis beverages falter, with them making up only a fraction of the industry's total sales.

"It's an adult beverage and most consumers assume that it would be available at LCBO, and it's not," Scott Cooper, chief executive officer of Truss, in a phone interview.

"Part of working with these retailers is that you want to arm them with some of this content, and the impact of 'budtenders' is just so influential. The more we can put this kind of content in their hands, the more we can build it."

Alongside the store takeover, Truss plans to market infused beverages to all of the country's retailers. The company plans to distribute more promotional material to businesses and to loan or give them fridges to keep the drinks cold, Cooper said.

Getting people interested in cannabis-infused drinks has been a challenge for Canada's legal marijuana industry. The category represents roughly just two per cent of all cannabis sales, according to industry data provider Hifyre.

Cannabis beverages amounted to only $28 million of the $2.6 billion in total legal marijuana sales made last year, though about $24 million in drinks have been sold in the first five months of the 2021 according to Hifyre. It's a far cry from the $529 million in annual sales that Deloitte predicted cannabis-infused beverages would bring in a 2019 report.

A survey of over 1,000 Canadians released Monday by Dalhousie University's Agri-food Analytics Lab found that just four per cent of cannabis consumers preferred infused beverages over all other edibles, while the majority of Canadians do not see cannabis and alcohol as equivalent products.

The marketing or advertising of cannabis is mostly restricted to age-gated establishments or social media, with drinks only available at licensed stores. Customers are also limited to buying roughly five individual items per purchase. Regulations currently prohibit the sale of the same pot-infused beverages in restaurants or bars, a fact that Cooper and many of his competitors are looking to amend through early-stage discussions with provincial and federal regulators.

Cooper noted that the best way to combat that uncertainty on cannabis drinks is to target retailers.

"For retailers, this is really the first summer where you have full range of beverages available. It's a significant commercial opportunity for them to capitalize on the increasing presence [of these products]," he said.