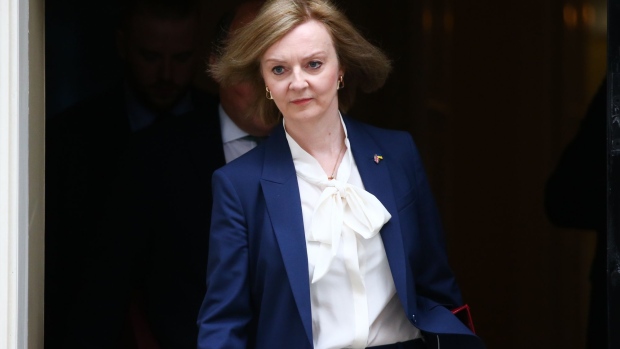 (Bloomberg) -- Foreign Secretary Liz Truss is preparing to reveal how the UK would legislate to override parts of the Brexit deal with the European Union, a move that would exacerbate tensions with Britain’s biggest trading partner.

Truss could set out details as soon as next week on how the UK plans to address what it sees as economic and political disruption caused by the Northern Ireland Protocol, according to two people familiar with the matter. Still, she doesn’t intend to scrap the parts of the deal affecting the region immediately, and wants to keep talking to the bloc, one of the people said.

Relations between the two sides have deteriorated to crisis point over the UK’s repeated threat to unilaterally re-write the Brexit divorce deal, which Boris Johnson’s government both negotiated and signed -- and has yet to fully implement -- but now argues was never meant to be the “finished” solution.

Such a move would likely trigger a trade war with the EU, which rejects UK demands to rewrite the protocol.

There have been mixed messages from Johnson’s government in recent days that have caused confusion and raised the temperature in London and Brussels. According to another person familiar with the government’s thinking, no decisions have been taken on how the UK will proceed and when, with Johnson’s cabinet gathering on Monday to discuss the issue.

Johnson is also due to visit Northern Ireland on Monday, the Press Association cited Sinn Fein vice president Michelle O’Neill as saying on Friday. A spokesperson for the prime minister’s office had no immediate comment.

Truss this week criticized the EU’s proposals to resolve the situation in Northern Ireland, saying they were insufficient to resolve the standoff and in some cases took the situation “backward.” She has repeatedly said Britain won’t shy away from taking action if the EU doesn’t agree to lift trade barriers -- included in the accord -- between Northern Ireland and the rest of the UK.

But EU negotiator Maros Sefcovic pushed back. “We in the EU never work with threats, we never work with blackmail, we try to work with constructive engagement,” he said on Thursday. “This is what I’m pleading for.”

Why Are the UK and EU Heading Toward Another Brexit Crisis?: Q&A

Truss is now preparing to outline how the UK would use domestic legislation to directly amend the Brexit deal it signed with the EU, the people familiar said. The foreign secretary is also hoping that revealing the plan will be enough to encourage the pro-UK Democratic Unionist Party to participate in Northern Ireland’s devolved government, another person said.

The DUP has made the removal of the Northern Ireland protocol a condition of joining the power-sharing government, a stance that has paralayzed the fragile politics in the region which held elections last week.

Britain’s attorney general Suella Braverman told the BBC late Thursday that while there was still a decision to be made, action to solve the Northern Ireland situation was “becoming painfully, apparently necessary.”