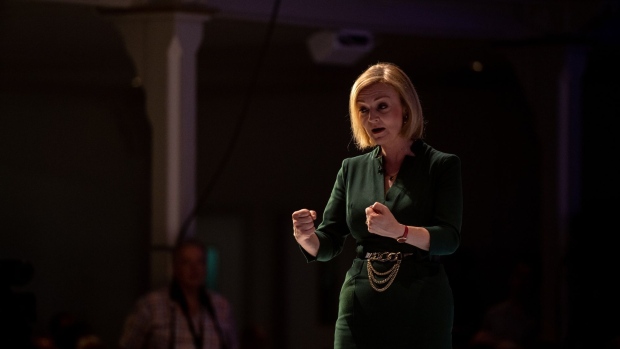 (Bloomberg) -- Conservative leadership front-runner Liz Truss ruled out a fresh windfall tax on energy companies if she becomes prime minister, while her opponent Rishi Sunak vowed to find up to another £10 billion to help Britons pay for soaring power bills.

Truss’s comments at a hustings in Cheltenham came after Prime Minister Boris Johnson held talks with energy companies Thursday, where Chancellor of the Exchequer Nadhim Zahawi hinted that the Treasury was exploring new taxes on electricity generators.

Ministers would “evaluate the extraordinary profits seen in certain parts of the electricity generation sector and the appropriate and proportionate steps to take,” Zahawi said.

But Truss rejected that approach, arguing: “One thing I absolutely don’t support is a windfall tax. It’s a Labour idea and all about bashing business and it sends the wrong message to international investors and to the public.”

“I don’t think profit is a dirty word, and the fact it has become a dirty word in our society is a massive problem,” she added. “The energy giants, if they are in an oligopoly, should be held to account. And I will rigorously hold them to account, but the way we bandy around the word profit as if it’s dirty and evil, we shouldn’t be doing that as Conservatives.”

Her opposition to a new windfall tax on energy companies appeared at odds with polling suggesting both Conservative and Labour voters would support the policy.

In an article for the Times newspaper, Sunak sketched out a plan to ensure households can pay their energy bills this winter. To finance it, he said he’d probably levy more funds from power companies, identify savings across the government and, as a last resort, increase borrowing.

“Because whatever the ‘boosterish’ talk of others, you can’t heat your home with hope,” Sunak said in a swipe at some of Truss’s previous comments.

Truss once again refused to be drawn on any further support she would offer households to deal with rising energy bills, but did give some details of her future energy policy.

Truss would seek to get more gas in the North Sea on stream “pretty quickly,” she said, and expressed her support for fracking, tidal, nuclear and hydrogen power, but said she opposed solar panels on farming land.

Truss vowed not to call a general election before 2024 and suggested she would review the regulation of utilities including water companies.

“I think the problem with a lot of utility regulation is that we were one of the first countries to privatize utilities and we created these regulators, but over time, they have become less effective at doing the job, and in some cases they are actually not promoting enough growth and competition as well,” she said.

“So I would review the regulators and how they are operating to make sure they are much more effective,” calling water “a natural monopoly and we have to be tough on the water companies to do the right thing.”