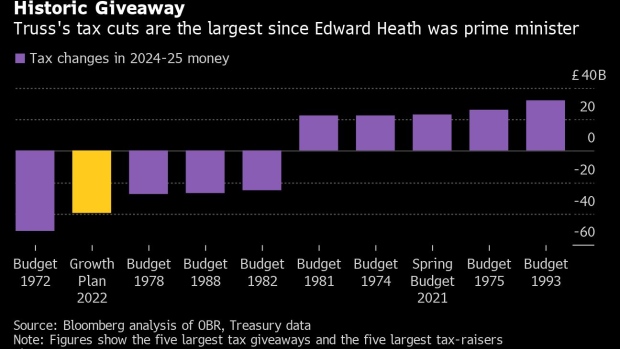 Raphael Bostic, president and chief executive officer of the Federal Reserve Bank of Atlanta, arrives for a Bloomberg Television interview at the Jackson Hole economic symposium in Moran, Wyoming, US, on Friday, Aug. 26, 2022. Federal Reserve officials stressed the need to keep raising interest rates even as they reserved judgment on how big they should go at their meeting next month. , Bloomberg

The UK government’s tax-cutting blitz is drawing the concern of international policy makers, with a Federal Reserve official going as far as to say the subsequent fallout in financial markets adds to headwinds facing the world economy.

Asked on Monday whether the downturn in UK markets increases the odds of a global recession, Fed Bank of Atlanta President Raphael Bostic said: “It doesn’t help it.”

“What we have seen in the reaction to the proposed plan is a real concern, a fear that the new actions will add uncertainty to the economy,” Bostic said in an online discussion hosted by the Washington Post. “The proposal has really increased uncertainty and really caused people to question what the trajectory of the economy is going to be.”

Speaking hours later at an event hosted by the Frankfurter Allgemeine Zeitung newspaper, German Finance Minister Christian Lindner also raised doubts about the UK’s biggest reduction of taxes since the early 1970s. The announcement prompted the pound to slide and bond yields to surge.

“In the UK, a major experiment is starting as the state simultaneously puts its foot on the gas while the central bank steps on the brakes,” Lindner said. “I would say we wait for the results of this attempt and then draw the lessons.”

The comments by policy makers from two of the largest economies adds to the drumbeat of criticism Prime Minister Liz Truss has received for the new stimulus, which is set to land with the economy already struggling with inflation around double-digits.

“I would admit that it would be an easy prediction that the response that is being given in the UK may also generate difficulties,” Centeno, who heads Portugal’s central bank, told a conference in Lisbon.

Former US Treasury Secretary Lawrence Summers, a paid contributor to Bloomberg TV, has already blasted the policy as “naive,” while Nobel laureate Paul Krugman tweeted it was “stupid and cruel” and an “embrace of zombie economics.”

(Updates with Centeno in penultimate paragraph)