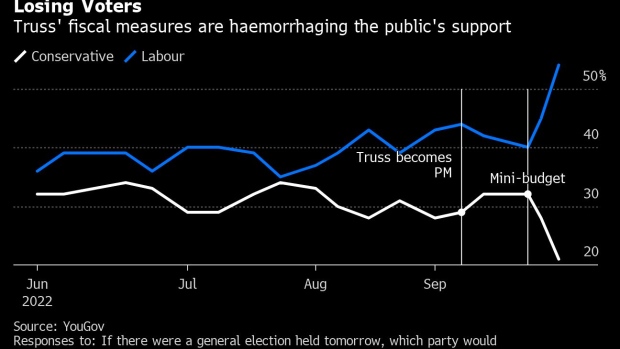 Liz Truss, UK prime minister, rights, and Kwasi Kwarteng, UK chancellor of the exchequer, sing the national anthem during the Conservative Party's annual autumn conference in Birmingham, UK, on Sunday, Oct. 2, 2022. Truss acknowledged her UK government mishandled the announcement on unfunded tax cuts which triggered a week of turmoil in financial markets, while insisting her approach is the correct one. , Bloomberg

(Bloomberg) -- Britons’ anger over inequality is shaping the agenda at the ruling Conservative Party’s annual conference in Birmingham, limiting the options for Liz Truss.

The new prime minister and her Chancellor of the Exchequer Kwasi Kwarteng planned to unleash a wave of deregulation and tax cuts to fuel what they say will be a “new economic deal for Britain.”

But their plans are rapidly unraveling. That’s partly because financial markets balked at the scale of unfunded tax cuts. But it’s largely because Tory MPs see polls showing that policies that help the rich during a cost-of-living crisis will likely put their seats in danger at the next general election, due by January 2025 at the latest.

The chancellor’s mini-budget had the worst reception of any financial statement since 2010, according to a YouGov survey. Although the government on Monday climbed down over its proposed tax cut for the top 1% of earners, Truss and Kwarteng are now fighting fresh fires over their suggestion that they will cut welfare payments in real terms for the poorest families in the country.

Speaking in an interview with LBC radio on Tuesday, Truss said that although pensioners would see their payments rise with inflation, “it’s a different situation for people who are in the position to be able to work.”

Around 38% of people receiving universal credit -- the main form of welfare payments -- are working, according to government data.

But there’s been a sharp increase in people falling out of the workforce due to illness since the Covid-19 pandemic, with employment numbers last month showing the highest number of working-age adults being classed as long-term sick on record.

MPs have already clashed in their views on benefit payments. Home Secretary Suella Braverman called for a cut to welfare spending, saying the UK should make sure people are “empowered” to work. But Penny Mordaunt, leader of the House of Commons, indicated she is in favor of welfare payments rising in line with inflation. Other prominent Tory MPs, including former minister Michael Gove, have implied that they won’t support a real-terms cut.

Doing so would affect the 4.2 million working-age households on universal credit, along with 2.6 million working-age families on “legacy benefits” as of May this year according to government data compiled by the Joseph Rowntree Foundation, a poverty think tank. It would amount to the largest deliberate real-terms cut to the basic rate of benefits in history, according to the JRF.

Truss risks not only angering her voters, but also stoking divisions within her own party.

That’s particularly true for MPs in the so-called Red Wall -- traditionally working-class areas where the Conservatives scored historic victories at the last general election in 2019. But those MPs are now seeing their constituents being particularly vulnerable to policies such as a cut in benefits.

Before the U-turn, Gove said the mini-budget gave the impression the government was prioritizing the wealthiest earners. “Conservatives should be prudent when dealing with the nations finances, particularly at a challenging point like this,” he said.

Former Labour Prime Minister Gordon Brown wrote in the Guardian on Tuesday that the government is still clinging to £43 billion of tax cuts and that public services and those on benefits will feel the pain.

“Public investment is needed to create the conditions for growth and any sensible growth strategy has to offer more than tax cuts and deregulation,” said Brown, who also served as Chancellor of the Exchequer. “When the strong help the weak it makes us all stronger.”