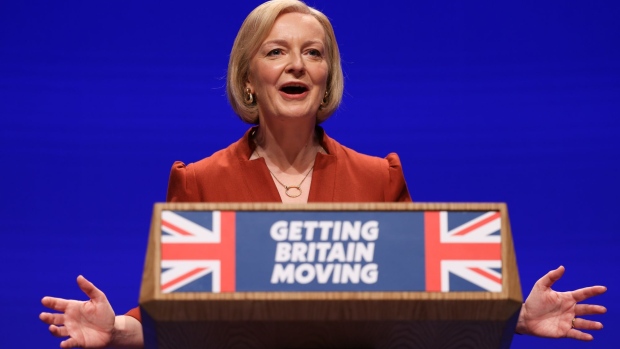 UK premier Liz Truss sought to rally despondent members of her ruling Conservatives, pledging to “stay the course” after a bruising few days in which she U-turned on a flagship tax cut and members of her own cabinet openly questioned her plans.

“Whenever there is change, there is disruption,” Truss said in a closing speech to her party’s conference in Birmingham on Wednesday. “I’m determined to get Britain moving, to get us through the tempest and to put us on a stronger footing,” she said.

The annual gathering, just a month into Truss’s tenure, has been overshadowed by a humiliating government climbdown over a plan to cut income tax for Britain’s highest earners. While the proposal itself had sparked a sell-off in the pound and gilts amid market concerns about unfunded promises, the reversal then led to criticism from two cabinet ministers.

Meanwhile other ministers publicly warned that Truss must raise welfare payments in line with inflation, after she refused to commit to the plan.

While party conferences are supposed to bring together like-minded people to celebrate their political achievements and showcase what’s to come, this one has only exposed the Tories’ deep divisions under a new premier with less than two years until an expected general election.

Truss attempted to allay market concerns by promising to keep an “iron grip” on the country’s finances, stating that she believes “in sound money and a lean state” and pledging to cut debt as a proportion of national income.  Nevertheless, the pound extended losses after the speech, sliding as much as 1.3% to $1.1322.

While the premier showed contrition about her misstep in trying to scrap the top income tax rate, she also pledged the Conservatives would “always be the party of low taxes,” and listed her priorities as “growth, growth and growth.”

The prime minister was forced to pause her speech when Greenpeace activists staged a protest in the audience, waving a banner asking: “Who voted for this?” Truss then quipped that they had arrived early, because later in her speech she planned to talk about the “anti-growth coalition.”

Opposition parties Labour, Liberal Democrats and the Scottish Nationalists were part of that coalition, she said, along with “militant unions,” “vested interests dressed up as think-tanks,” and “Brexit deniers.”

In her 35-minute speech, Truss also:

“Not everybody will be in favor of change,” Truss said. “But everyone will benefit from the result -- a growing economy and a better future. That is what we have a clear plan to deliver.”

But the market ructions and party disarray caused by the economic strategy Truss and Kwarteng announced on Sept. 23 -- including the biggest set of unfunded tax cuts in half a century -- have sent the Tories plummeting in the polls to a record deficit behind Labour.

Just 14% of Britons now have a favorable impression of Truss, down from 26% two weeks ago, according to a new YouGov survey released Wednesday.

As well as the market fallout, Truss’s and Kwarteng’s economic plans had triggered a backlash from Tory Members of Parliament concerned that the government was focusing more on helping the rich than the lowest-paid, at a time when millions of Britons are struggling to pay their bills amid soaring inflation.

That led to Truss’s surprise retreat on the top tax rate on Monday, less than 24 hours after she’d vowed to stick to the policy on live television.

Home Secretary Suella Braverman told a side event on Tuesday she was “disappointed” by the U-turn, while fellow cabinet minister Simon Clarke said Braverman was speaking “good sense.”

Despite this week’s major reversal, Truss sought to portray herself as decisive, saying: “I am ready to make hard choices.”

(Updates with context and quotes throughout)