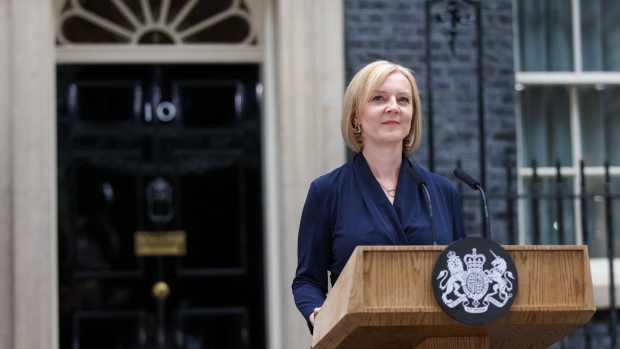 More than half of Britons think Liz Truss should quit as UK premier, according to a YouGov poll that adds to her woes less than a month into the job.

The survey on Friday underscores the damage done to Truss’s standing and that of her Conservative Party by the huge package of unfunded tax cuts her government unveiled a week ago, triggering a selloff in the pound and government bonds and leaving her party trailing the opposition Labour by a record distance.

Some 51% of almost 5,000 Britons surveyed said the prime minister should quit, with 54% saying Chancellor of the Exchequer Kwasi Kwarteng should resign.

Even in the face of a backlash from markets, Tory Members of Parliament and the electorate, Truss and Kwarteng so far have stood firm behind their fiscal package -- which benefitted the wealthiest more than for lower earners -- insisting they’ll come forward with a medium-term plan for the economy and a set of independent economic forecasts on Nov. 23.

The beleaguered prime minister now heads into her Conservative Party’s annual conference on Sunday with the challenge of restoring her standing among her MPs and persuading the financial markets that the Tories still stand for the responsible management of the economy.

The YouGov poll also showed Truss is also hemorrhaging support among those who voted Conservative at the last general election in 2019. Some 36% of Tory voters said Truss should go and 41% called for Kwarteng’s departure.

The latest survey piles the misery on the Tories after a YouGov poll of voting intentions on Thursday gave Labour a record 33-point lead.