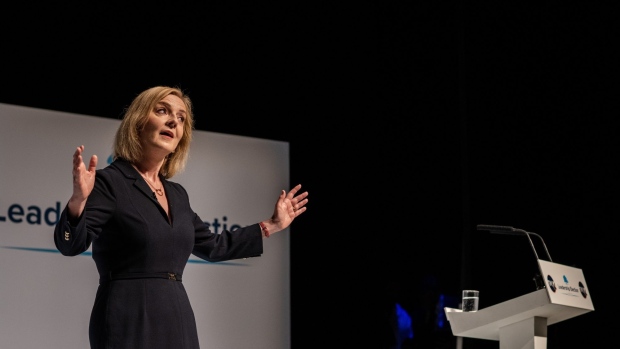 (Bloomberg) -- Liz Truss is likely to give ministers the power to overturn some financial regulators’ decisions if she becomes UK prime minister, a potential move that could set up fresh tensions with the Bank of England.

Allies of Truss say she favors “call-in” powers to allow the government to block or change the actions of financial regulators, including the central bank’s Prudential Regulatory Authority and the Financial Conduct Authority.

Her position, which was first reported by the Financial Times, means whoever enters 10 Downing Street on Sept. 6 supports the mechanism. Truss’s rival for the leadership, former Chancellor of the Exchequer Rishi Sunak, argues that such powers are needed to ensure politicians -- not “faceless regulators” -- are accountable for regulatory decisions.

That would mark a seismic change from a long-standing status quo in the City of London enshrining the independence of regulators. The consideration of call-in powers has sent tremors through some areas of the Square Mile and will raise fresh questions about the future autonomy of the central bank, which has been targeted by angry Tory MPs over its response to soaring inflation.

Some regulatory lawyers and officials fear the oversight could spill over into inappropriate interference by politicians, potentially following lobbying from companies or special interest groups, to make changes.

The push comes as both Sunak and Truss pitch the benefits of easing regulations to encourage growth and investment. For instance, both have touted relaxing the capital requirements over insurers, which are a legacy of the UK’s European Union membership, to boost competitiveness.

The slow pace of change -- and accusations that regulators are moving too slowly -- has sparked frustration in the government and Tory party.

The Treasury was exploring including such powers in the Financial Services and Markets Bill before Sunak’s resignation in July helped trigger the resignation of Prime Minister Boris Johnson.

Sunak’s successor, Nadhim Zahawi, then decided not to include the powers in the bill, in line with Johnson’s commitment that his government would not undertake major policy changes until the new prime minister takes office.

Still, the call-in mechanism could yet be added alongside other changes as the bill makes its way through Parliament.

John Glen, an ally of Sunak who stepped down as City minister as part of the upheaval in the Conservative Party, has said the idea of a call-in power was never intended to threaten the Bank of England’s independence.

“It was envisaged as an absolute backstop, an emergency option to avoid a government having to do primary legislation,” Glen told Bloomberg TV last month. “The Bank of England, PRA and Financial Conduct Authority do an excellent job, and their independence and having strong regulators is absolutely instrumental to the success of the UK’s financial services sector.”