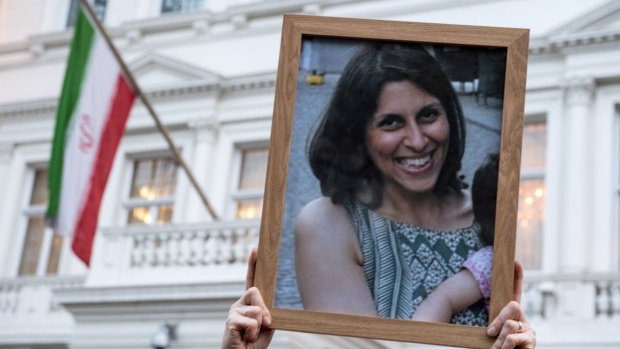 A supporter holds a photo of Nazanin Zaghari-Ratcliffe during a vigil in 2017. , Getty Images via Bloomberg

Days into her new role, Truss will speak to Iranian Foreign Minister Hossein Amirabdollahian at the United Nations General Assembly in New York, her office said in an emailed statement. The foreign secretary will also say that Iran’s non-compliance with the 2015 nuclear deal with world powers is blocking progress toward a reset of relations that is in both countries’ interests.

“I will be asking Iran to ensure the immediate and permanent release of all arbitrarily detained British nationals in Iran, and to begin working with us to mend our fractured relations,” Truss said in the statement.

Zaghari-Ratcliffe, a British-Iranian dual national, has been held in Iran since 2016. After completing a five-year sentence for sedition and espionage in Tehran in March, she was handed another one-year term for “propaganda against the state.” She has always denied the charges against her.

Her case has long been a thorn in U.K.-Iran relations and Truss’s predecessor, Dominic Raab, has suggested Tehran is holding Zaghari-Ratcliffe hostage. Prime Minister Boris Johnson is also inextricably linked to the issue since he wrongly told Parliament in 2017 -- when he was foreign secretary -- that she had been in Iran to train journalists.

In her meeting, Truss will also call on Iran to abide by its nuclear commitments, and reiterate a U.S. offer to lift sanctions if it does so.

“The U.K., U.S. and our international partners are fully committed to a nuclear deal,” Truss said in the statement. “But every day that Iran continues to delay talks whilst escalating its own nuclear program means there is less space for diplomacy.”