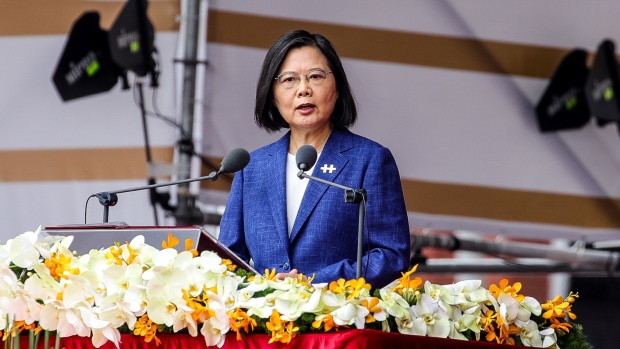 Tsai Ing-wen, Taiwan's president, speaks during the National Day celebration in Taipei, Taiwan, on Sunday, Oct. 10, 2021. Taiwan President Tsai Ing-Wen said the island is facing “unprecedented challenges” and will defend its sovereignty, pushing back after Chinese leader Xi Jinping declared a day earlier that unification will be achieved. , Bloomberg

(Bloomberg) -- Taiwanese President Tsai Ing-wen said she is confident the U.S. would come to the island’s defense if China tried to invade, a comment bound to irk Beijing as it continues to clash with Washington on cross-strait ties.

“I do have faith given the long-term relationship that we have with the U.S. and also the support of the people of the U.S. as well as the Congress,” she said in an interview with CNN that aired Thursday. “The administration has been very helpful.”

Tsai added that the “threat from China is increasing every day” and confirmed the presence of U.S. troops in Taiwan, although said there were “not as many as people thought.” U.S. Department of Defense records show troops on the self-ruled island, which Beijing considers a breakaway province that must be brought under its control, rose to 32 this year from 10 in 2018, CNN reported.

Taiwan has become a flashpoint in already tense U.S.-China ties, with President Joe Biden facing growing calls to clarify the U.S. commitment to defending the island as Chinese President Xi Jinping ramps up diplomatic, economic and military pressure on its democratically elected government.

Adding to that friction are U.S. efforts to boost Taiwan’s role in the United Nations. Chinese Foreign Ministry spokesman Zhao Lijian told a regular news briefing Wednesday that the campaign “will surely bring game-changing and huge risks to China-U.S. relations.”

Biden and Xi are preparing to hold their first summit via video since the new U.S. president took office in January, with Taiwan very likely to be on the agenda.