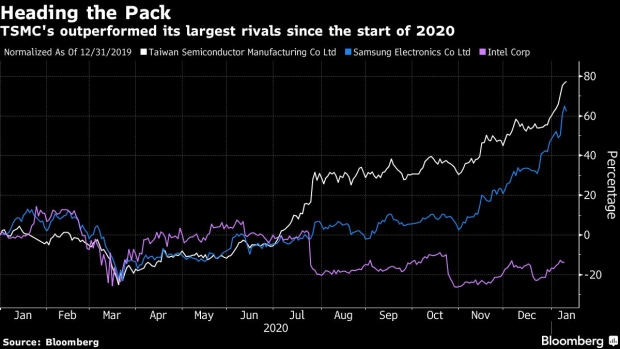 (Bloomberg) -- Taiwan Semiconductor Manufacturing Co. expects to boost capital spending to as much as $28 billion this year in order to safeguard its lead in advanced technologies that made it chipmaker of choice to the world’s technology and auto giants.

Capital spending for 2021 is targeted at $25 billion to $28 billion, compared with $17.2 billion the previous year, Chief Financial Officer Wendell Huang said on a conference call. The increase in capex is intended to meet surging demand for the chipmaker’s advanced technologies, he added. Revenue for the first quarter is expected to at between $12.7 billion to $13 billion, ahead of the the average analyst estimate of $12.4 billion.

Shares of the world’s largest contract chipmaker have surged more than 70% since the start of 2020, with investors betting that the likes of Apple Inc. will continue to lean on its widening technological lead over Samsung Electronics Co. The company has become a lynchpin in a plethora of sectors including consumer electronics and automaking, with its chips powering everything from iPhones phones to fridges and cars.

About 80% of the capital spending will be devoted to advanced processor technologies -- namely 3nm, 5nm and 7nm -- development, Huang said.

Net income in the quarter ended December climbed 23% to NT$142.8 billion ($5.1 billion), compared with the NT$137.2 billion average of analyst estimates, the chipmaker said Thursday. That contributed to a 50% increase in full-year profit, the speediest rate of expansion since 2010. Sales in the December quarter climbed 14% to a record NT$361.5 billion, according to previously disclosed monthly numbers, helped in part by robust demand for Apple’s new 5G iPhones.

The fourth-quarter results revealed increasing contributions from TSMC’s most-advanced 5-nanometer process technology -- used to make Apple’s A14 chips. That accounted for about 20% of total revenue during the quarter, more than doubling its share from the previous three months, while 7nm represented 29%. By business segment, TSMC’s smartphone business contributed about 51% to revenue, while high-performance computing (HPC) was at 31%.

As rivals like United Microelectronics Corp. fall behind and Semiconductor Manufacturing International Corp. struggles with American sanctions, TSMC’s pivotal role is likely to expand in 2021. The company has been racing to meet demand from larger-volume electronics clients, exacerbating a severe shortage of automotive chips that’s forcing firms like Honda Motor Co. and Volkswagen AG to curtail production. Even Intel Corp. was said to be considering outsourcing to the Asian firm after a series of inhouse technology slip-ups, though it’s unclear whether the company may pivot after the appointment of a new CEO.

TSMC said the automotive industry had been “soft” since 2018 and demand only started to recover in the fourth quarter. The company is working with its automotive customers to resolve the capacity supply issues, Chief Executive Officer C.C. Wei said.

Foundries such as TSMC, UMC and Globalfoundries Inc. aren’t expanding fast enough to meet the pandemic-induced spike in demand for gadgets. Those bottlenecks snarled the flow of chips not just to cars, but also Xboxes and PlayStations and even certain iPhones. TSMC is by far the most advanced of the foundries responsible for making a significant portion of the world’s semiconductors, serving the likes of Qualcomm Inc. and NXP Semiconductors NV, which also supply the mobile and auto industries.

“The world needs advanced silicon and only TSMC has that,” Bernstein’s Mark Li wrote Tuesday in a note. The analyst raised his share price target to NT$800, representing gains of more than 30%.