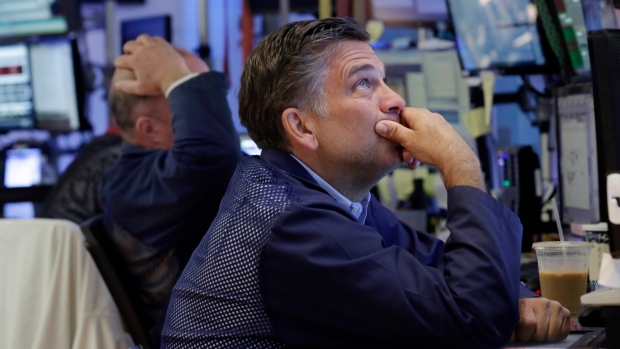 Canada's main stock index pulled back more than one per cent with a three-digit loss Wednesday, as oil prices fell and the U.S. Federal Reserve announced it wasn't ready to move on interest rates yet.

The U.S. central bank says it's leaving interest rates unchanged, but hinted that a hike will likely come soon.

Fed policy-makers said the case for an increase has "continued to strengthen" as the economy shows steady growth. Most Fed watchers expect a rate increase at the central bank's next two-day meeting which begins Dec. 13.

The markets had pegged the possibility of a hike this month as slim while the U.S. prepares to head to the polls to vote for a new president in less than a week.

Michael Currie, a vice-president and investment adviser at TD Wealth, said the Fed has always maintained that it will move on rates if the economic data supports it — but an uncertain election result looming also likely had some bearing on their decision.

"In a sense, they're being political in trying to be non-political," he said. "Any kind of move here would've made a push for one [political] party or another... They still have a little bit of wiggle room until the end of the year and they played it safe."

But Currie said the Fed needs to make a move sooner rather than later, because the expectation is that there will be at least one increase this year.

HAVE YOUR SAY: What’s the most important part of an earnings release for you? https://t.co/s59XzNB3AW

Other commodities were mixed with December natural gas dropping 11 cents to US$2.79 per mmBTU and December copper contracts gaining one cent at US$2.23 a pound.

With files from The Associated Press.