The IPO boom is a testament to the confidence issuing clients have on us: TMX CEO

TMX Group Ltd., the parent company of the Toronto Stock Exchange, closed at its highest level since July 2020 after posting revenue and earnings that beat analysts’ expectations, thanks to a boom in listings and corporate financing.

Chief Executive Officer John McKenzie said the second quarter continued a “capital markets renaissance,” as an increasing number of companies have found investors receptive to their initial public offerings and follow-on equity deals. The trend looks set to continue for some time as the IPO pipeline remains “very robust,” he said.

Revenue from capital formation -- which includes fees charged to companies when they go public or raise additional capital -- rose 44 per cent in the quarter over the previous year, TMX said in a statement. The shares jumped 4.4 per cent to close at $142 in Toronto on Thursday and are up almost 12 per cent this year.

“As companies get successful deals done, other companies see the opportunity of using the public markets to do the same, and success begets success,” McKenzie said in an interview Thursday. 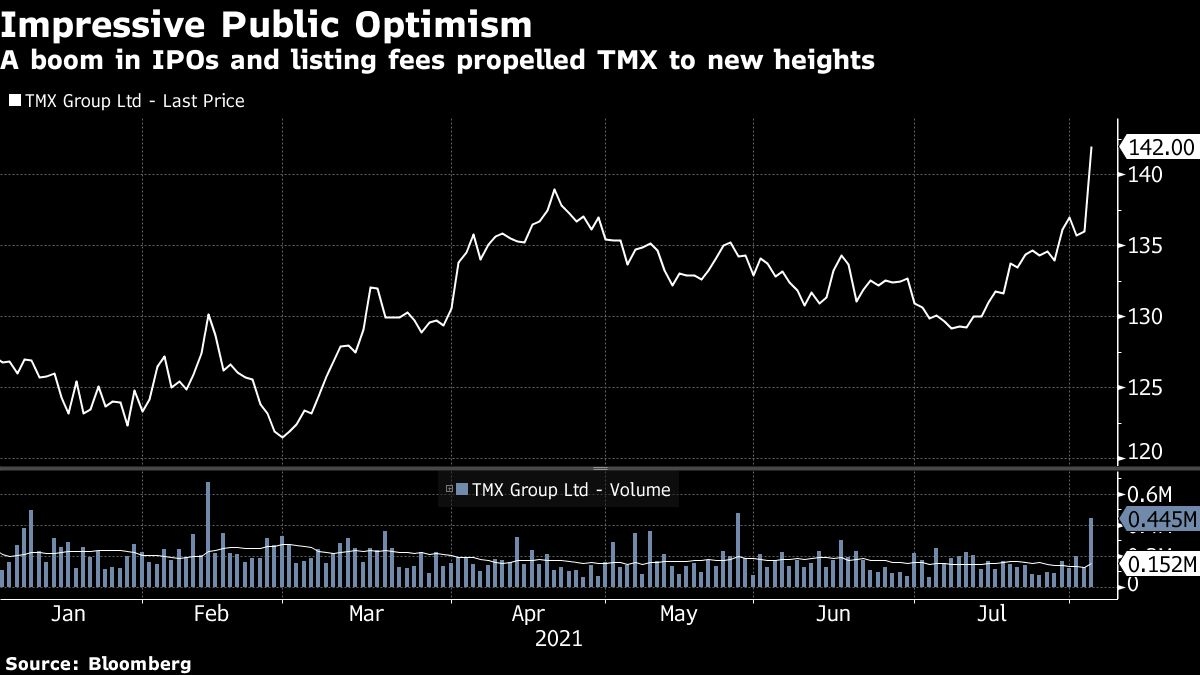 The capital formation revenue gains more than offset a drop in equity and bond trading fees. Overall, the company’s sales were $245 million (US$196 million) in the quarter, 13 per cent higher than a year earlier. Revenue from derivatives trading and data sales also rose.

Net income was $107.1 million on an adjusted basis, or $1.90 per diluted share. The number included a boost of 35 cents a share related to changes in the U.K. tax rate. Analysts had forecast $1.68 share.

The second quarter of 2020 was characterized by frenetic trading activity as stocks bounced back from the pandemic-related crash in February and March of that year. Trading activity on all the equities marketplaces TMX runs fell by 12 per cent, the company said.

The quieter trends continued in July and into August, partly from “market fatigue” after an exceptionally busy period for traders, McKenzie said. Activity by retail traders looks poised to normalize at a higher rate than before the pandemic, helped by new, low-cost trading platforms and the proliferation of exchange-traded funds, McKenzie said.

“I do expect that it’s going to be elevated from where we were because of those more permanent market-structure changes, in terms of ease of access, direct-trading tools that traders didn’t have in the past, comfort with direct trading that some traders may not have had beforehand,” McKenzie said.