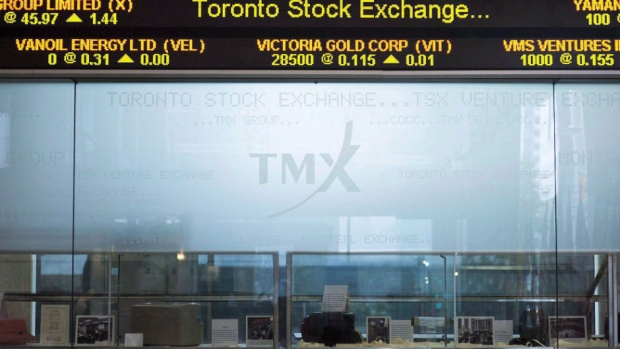 TORONTO -- The loonie took a dive Friday as disappointing economic data coupled with recent comments by Bank of Canada governor Stephen Poloz hinted that an interest rate cut may be on the horizon.

The Canadian dollar finished the day at 75.04 cents US, down 0.59 of a cent after Statistics Canada released new economic data showing weaker-than-expected inflation and retail sales figures.

The federal agency said the consumer price index was up 1.3 per cent in September compared with a year ago.

That's higher than the year-over-year increase of 1.1 per cent recorded in August, but lower than the 1.5 per cent that economists had predicted for September.

Statistics Canada also reported that retail sales fell 0.1 per cent to $44.0 billion in August. The decline was due to lower sales at motor vehicle and parts dealers as well as general merchandise stores.

Earlier in the week, Poloz said the central bank's governing council actively discussed the possibility of cutting its benchmark lending rate before deciding to leave it at 0.5 per cent.

"This week we had the Bank of Canada governor alluding to potential rate cuts, so that would create some uncertainty in people's minds," said Colum McKinley, vice-president and portfolio manager of Canadian equities at CIBC Asset Management Inc.

"And then today we backed that up with economic data that was weaker than people expected. So I think the combination of those events is what's likely leaning on the dollar today."

Most segments of the TSX closed higher, with energy stocks leading the way, up 0.94 per cent on stronger crude prices.

"For the food retailers, a deflationary environment has a very negative effect on their revenue growth, so you're seeing those stocks underperform because of that today," McKinley said.

In other commodity news, the December crude contract strengthened to US$50.85 per barrel, up 22 cents.

"There is a growing confidence that OPEC and other participants will work to reduce supply or control supply growth, and all of that is being reflected in the energy prices," McKinley said.