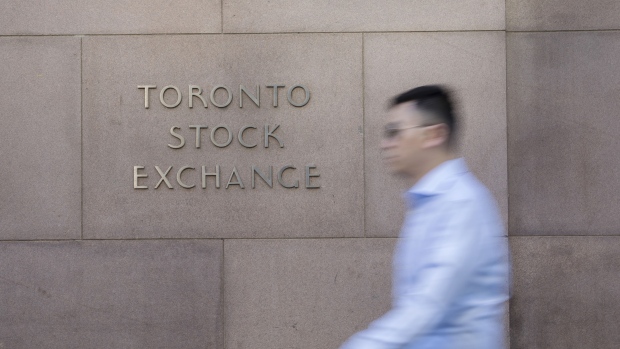 A pedestrian walks past the Toronto Stock Exchange in the financial district of Toronto, Ontario, Canada, on Wednesday, July 11, 2018. , Brent Lewin/Bloomberg

"Flat would definitely be the word for today," said Michael Currie, vice president and investment adviser at TD Wealth.

It's a change from a fairly up-and-down week which saw all four indexes drop early on trade fears, only to recover Wednesday as a potential U.S.-China deal appeared closer.

Following that volatility, traders are waiting on two pieces of news, said Currie.

First, the Organization of the Petroleum Exporting Countries (OPEC) is meeting Thursday in Vienna. They meet again Friday.

The group will decide whether to cut their oil production, pushing up prices. They are expected to prolong the cuts they've agreed on for the past three years. OPEC has already committed to cut production by 1.2 million barrels per day through March 2020.

Some have speculated the group could agree to further trim production, floating another possible cut of 400,000 or 500,000 barrels per day, said Currie.

Additionally, investors are awaiting jobs data from the U.S. Bureau of Labour Statistics, which will be released Friday morning.

In currency markets, the Canadian dollar traded at 75.91 cents US, compared with an average of 75.63 cents US on Wednesday.

The January crude oil contract remained unchanged at US$58.43 per barrel and the January natural gas contract advanced 2.8 cents to roughly US$2.43 mmBTU.