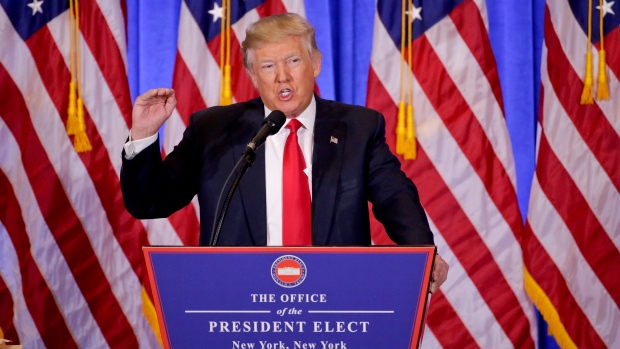 It was a day of ups and downs on stock markets as investors digested U.S. president-elect Donald Trump's first news conference Wednesday since his election in early November.

Although indexes, particularly on Wall Street, traded lower following the hour-long media availability, they rebounded from their losses by the end of day to finish higher.

Although the markets were positive as a whole, healthcare stocks were broadly lower following some negative comments from Trump at the presser.

He addressed a number of topics during the Q&A with reporters in New York, including how the government needs to overhaul how it buys drugs from pharmaceutical companies "because they're getting away with murder."

Michael Currie, a vice-president and investment adviser at TD Wealth, said the billionaire businessman is unpredictable and his comments -- good or bad -- will likely drive markets during his presidency.

"I don't think we've seen a president starting off like this," he said.

"He is very much off the cuff and going after companies either positively or negatively, very directly. It's hard to say what we can predict from him."

Stock markets have been rallying since Trump was elected last November because it views his policies as good for corporations, a trend Currie anticipates will continue until at least his inauguration on Jan. 20.

"The only thing we can say unequivocally is that the markets have liked what he's been doing so far," he said.

"But he hasn't really done anything as president yet, because he's not the president, so all the moves in the market has been in anticipation of what he is going to do. Once he's in, then you might see some selling, at least initially."

Shares in national retailer Hudson's Bay Company (HBC.TO) shed another 7.5 per cent Wednesday after the company announced a day earlier that it was lowering its sales forecast for the year. Its stock dipped 76 cents to close at $9.40.

Corus Entertainment Inc. (CJRb.TO) reported that its profit in the first quarter soared 72 per cent to $71.1 million, thanks to its acquisition of Shaw Media. Despite the positive news, its shares fell three per cent, or 40 cents, to close at $12.87.

In other commodities, the February gold contract added $11.10 to US$1,196.60 per ounce, February natural gas dipped five cents to US$3.22 per mmBTU and March copper contracts were unchanged at US$2.61 a pound.