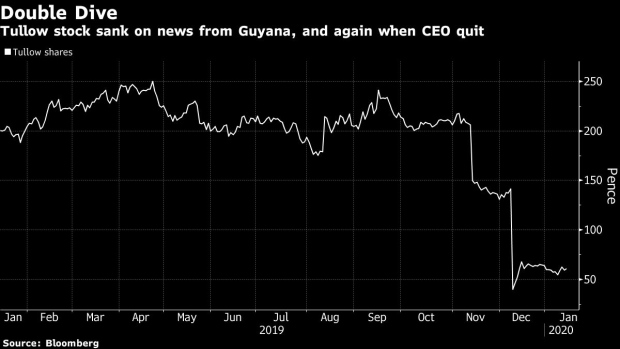 Tullow Oil Plc expects to take a charge of $1.5 billion when it reports 2019 results, capping a terrible year for the debt-strapped company.

The pretax sum of impairments and exploration write-offs reflects a lower oil-price forecast and a cut in reserves at a field in Ghana. Tullow’s assets in the West African country performed poorly in 2019, a year that also saw delays at East African projects, disappointing drilling results in Guyana and the resignation of Chief Executive Officer Paul McDade.

While Wednesday’s trading update indicated yet more obstacles for the company -- including the suspension of a pilot project in Kenya -- Tullow maintained its 2020 production guidance of 70,000 to 80,000 barrels a day and said it expects underlying free cash flow of at least $150 million.

“The news today reaffirms the outlook for 2020 and should increase certainty,” analysts at Davy Research said in a note. “Tullow has taken the opportunity to reset the balance sheet.”

The shares rose 1% to 59.76 pence at 11:28 a.m. in London, after earlier sliding 6.7%. The stock plummeted 64% last year -- the most on the Stoxx Europe 600 Oil & Gas index -- amid setbacks in Guyana and lower production forecasts in West Africa. The company is now conducting a review of its business and operations, resulting in a “smaller, more focused interim executive team,” it said on Wednesday.

The new leadership team is half the size of the previous line-up under McDade, comprising Executive Chairman Dorothy Thompson, Chief Financial Officer Les Wood, Chief Operating Officer Mark MacFarlane and Executive Vice President for Change, Ian Cloke. The search for a new CEO is under way and both internal and external candidates will be considered, Thompson said.

After years of focusing on Africa, Tullow plowed funds into drilling off Guyana last year in a closely watched campaign, following earlier finds there by Exxon Mobil Corp. Tullow struck oil several times, though much of it turned out to be heavy, sulfurous crude.

The company is now slowing the pace of activity in the South American country as it reviews last year’s results, according to COO MacFarlane. It’s “highly unlikely” there will be another well drilled there in 2020, he said on a call. Elsewhere on the continent, a well off Peru is planned this month.

Tullow’s $1.5 billion charge reflects a revision to reserves at the TEN project’s Enyenra field in Ghana and a drop in the long-term oil-price assumption to $65 a barrel from $75, the company said. It also includes a writedown of exploration costs, mainly in Kenya and Uganda.

The charge “highlights the disappointing track record of capital allocation over the past few years,” but “clears another negative out of the way” ahead of full 2019 results on March 12, Citigroup analysts said in a note. The trading update is “broadly in line with expectations,” they said.

To contact the reporter on this story: Paul Burkhardt in Johannesburg at pburkhardt@bloomberg.net

To contact the editors responsible for this story: James Herron at jherron9@bloomberg.net, Amanda Jordan, Rakteem Katakey