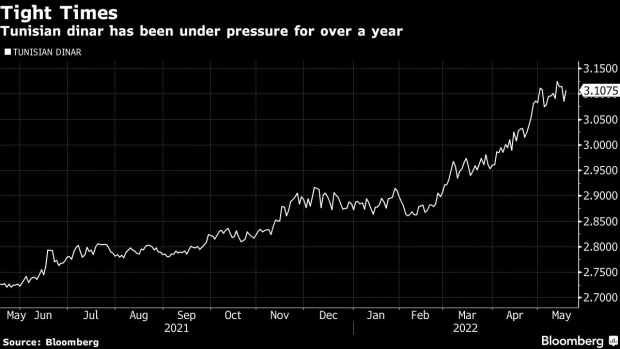 Tunisia’s central bank raised its key interest rate by 75 basis points, the first hike in over three years, as the war in Ukraine and surging inflation batter the North African nation’s economy.

The bank’s board boosted the key rate to 7%, according to a statement late Tuesday. The action comes amid a global wave of fiscal tightening as Russia’s invasion of Ukraine amplifies economic woes caused by the coronavirus pandemic.

In its domestic overview, Tunisia’s regulator said the current-account deficit widened to 2.7% of gross domestic product in the first four months of 2022 from 1.7% the previous year. Foreign reserves have dropped to 124 days of import cover versus 133 days at the end of 2021, it added, while reiterating its worries over inflation that accelerated to an annual 7.5% in April.

The mounting economic troubles come as the birthplace of the Arab Spring, mired in a political crisis, tries to secure a deal on a rescue package with the International Monetary Fund. While Tunisian officials have voiced optimism a pact is imminent, a lack of consensus between the government and the powerful UGTT trade union on possible reforms such as curbing the public wage bill and cutting subsidies risks delaying it.

The central bank again stressed the need to “initiate the necessary structural reforms as soon as possible.” But it warned that expected reforms would keep inflation at “historically high levels” this year and next.