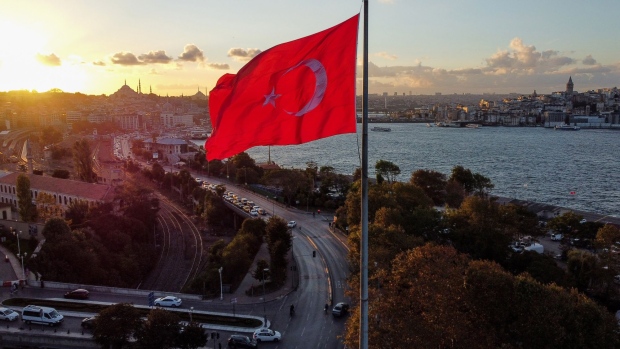 A Turkish flag by the Bosphorus strait during the evening sunset in Istanbul, Turkey, on Monday, Oct. 4, 2021. Turkey's consumer inflation accelerated in September, driven by a surge in the cost of energy. Photographer: Moe Zoyari/Bloomberg , Bloomberg

“Three countries are coming onto the list, they are Jordan, Mali and Turkey,” Marcus Pleyer, president of the Financial Action Task Force, told a virtual event Thursday. “They have all agreed action plans with the FATF and are actively working to address the strategic deficiencies identified in this system.”

The announcement places all three countries under increased monitoring to make sure that they work with the FATF to address ways to better counter money laundering, terrorist financing, and proliferation financing. The FATF gray-list is “another hurdle to investing in Turkey,” said Tim Ash, a strategist at BlueBay Asset Management in London.

Turkey’s government took exception to the group’s decision, calling it an “undeserved result,” given all of its compliance work.

The government “will continue to take necessary steps in cooperation with FATF and all related institutions and make sure that our country emerges from this listing that it does not deserve as soon as possible,” Turkey’s Finance and Treasury Ministry said in a statement Thursday.

The FATF, an Organization for Economic Cooperation and Development-sponsored global standards-setting body for combating money laundering, terror financing and proliferation of weapons of mass destruction, made its decisions after reviewing global compliance. It urged Pakistan, which remains on its gray list, to continue addressing its deficiencies.

The organization requires a consensus of its members to move a nation to the list, though the precise number isn’t defined.

Serious issues on Turkey remain, Pleyer said, such as ”supervision, in particular high-risk sectors such as banks, gold and precious stones dealers and real estate agents.” He also said the FATF is aware of human rights groups’ concerns about Turkey’s treatment of non-profit organizations, NPOs.

The country also “needs to implement a true risk-based approach to NPOs and ensure authorities don’t disrupt or discourage legitimate activity,” such as fundraising, the watchdog’s chief said.

Turkey needs to show it is “effectively tackling complex money laundering cases and show it is pursuing terrorist financing prosecutions in line with its risks and prioritizing cases of UN designated terrorist organizations such as ISIL and Al-Qaeda,” Pleyer said.