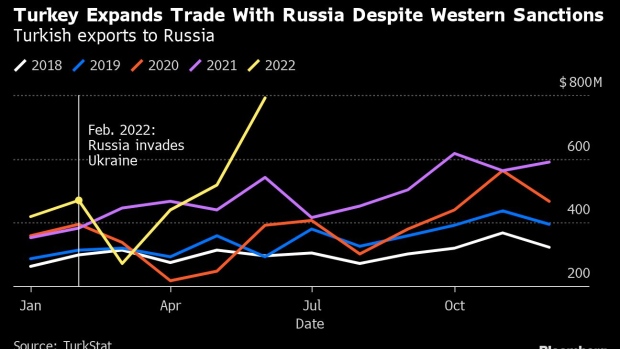 Sanctions over Russia’s invasion of Ukraine have forced it to divert oil sales and triggered an exodus of multinationals.

But one country is openly boasting of a boom in trade with Russia -- Turkey.

Transport Minister Adil Karaismailoglu took to Twitter to celebrate a 58% surge in vehicle trade with Russia in the first four months of the year as evidence of Turkey’s growing logistical strength.

That’s just one example of a broader spurt in Turkish exports to Russia that hit an eight-year high of $2.91 billion in the first half, according to state statistics service TurkStat.

The bonanza is good news for President Recep Tayyip Erdogan’s drive to grow exports as part of what he calls a “new economic model.” But it will frustrate Turkey’s NATO allies in the US and Europe who have tried to present a united front to isolate Russia’s economy with penalties.

Turkey hasn’t sanctioned Russia, trying instead to balance its relationship with both sides in the war. It supplies Ukraine with armed drones while encouraging Russian investment and the vital foreign currency it brings.

After hosting talks in Istanbul, Turkey brokered a deal to resume Black Sea grain exports trapped by the war.