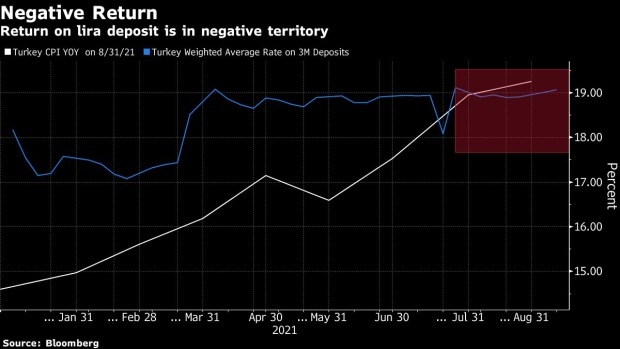 An electronic board displays currency exchange rate information inside the Grand Bazaar in Istanbul, Turkey, on Monday, Aug. 16, 2021. The lira and other Turkish assets gained this week, buoyed by an improved outlook for tourism and the rollout of vaccines. Photographer: Moe Zoyari/Bloomberg , Bloomberg

(Bloomberg) -- Turkey’s government will likely extend a tax incentive offered on lira deposit accounts to support the currency, according to people with direct knowledge of the matter.

The Treasury and Finance Ministry last year reduced the so-called withholding tax to encourage savings in the local currency. But consumer inflation has gradually climbed above Turkey’s benchmark interest rate, pushing depositor returns below zero once adjusted for price increases.

The proposal, currently being considered by the finance ministry, would extend the tax advantages until the end of 2021, the people said, asking not to be identified discussing policy plans.

The ministry said no decision had yet been made on whether the tax breaks would remain until the end of the year.