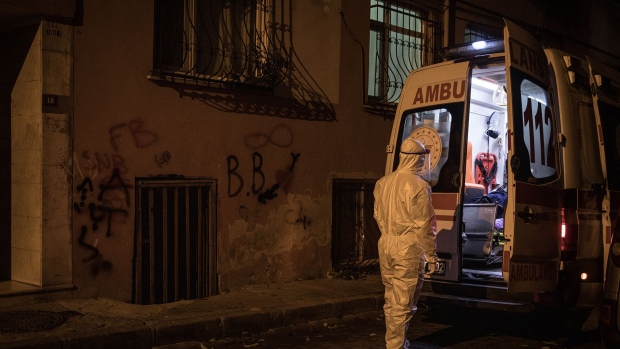 ISTANBUL, TURKEY - DECEMBER 10: Paramedics from Turkey’s 112 Emergency Healthcare services (EHS) work on a suspected Covid-19 positive patient before transporting him to hospital on December 10, 2020 in Istanbul, Turkey. Turkey continues to enforce restrictions including a weekday curfew and full weekend lockdowns amid a coronavirus surge that has seen infection rates across the country reach record highs. In a recent press conference Turkey's Health Minister Fahrettin Koca announced that the country's positive coronavirus cases had passed 1.7 million and that they will receive 50 million vaccines from China and will begin rolling out vaccinations in late December. (Photo by Chris McGrath/Getty Images) , Photographer: Chris McGrath/Getty Images Europe

Turkey reported 318 fatalities from the coronavirus on Sunday, a 10% rise from the previous day and the highest figure since the start of the pandemic.

As the number of new cases continues to hover among the highest in the world, an expert warned about the surge in the number of critically ill younger people.

Sunday’s death toll raised total fatalities to 35,926, official data show. Social distancing measures announced on April 13 have “started to decrease the speed of the increase,” Health Minister Fahrettin Koca said in a tweet. However, the nation ranks as the third in the number of daily cases, behind India and Brazil, whose populations are far larger than Turkey’s 84 million people.

“Alarm bells have been ringing for the past 15 days,” Ismail Cinel, head of the Turkish Intensive Care Association, told Demiroren News Agency on Sunday. “We now have more younger patients. The number of those heavily ill has been on the rise for the past six weeks. This is an extremely tough period for health-care staff.”

The surge also threatens the tourism industry. Earlier this month, Russia suspended most air travel with Turkey until June 1. Russia was the biggest source of tourists to Turkey in 2020, with 2.13 million visitors despite the pandemic. The Turkish government aims to double the number of foreign visitors to 34 million this year.