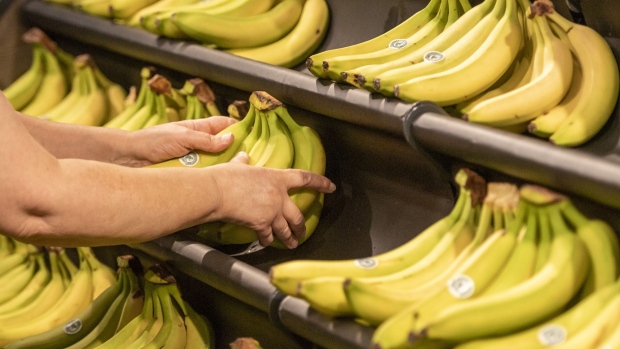 A customer picks a bunch of sustainably sourced bananas inside an Asda store, trialing new sustainability initiatives, in Middleton, U.K., on Thursday, Oct. 29, 2020. Walmart Inc. is pulling out of the cutthroat U.K. grocery market after 21 years, agreeing to sell control of grocer Asda to TDR Capital and two brothers who made their wealth in gas stations. Photographer: Anthony Devlin/Bloomberg , Bloomberg

(Bloomberg) -- Turkey is deporting at least seven Syrians for “provocatively” sharing their images while eating bananas on social media after a Turkish citizen complained that he can’t afford bananas while the refugees can.

“You’re living more comfortably. I can’t eat banana, you are buying kilograms of banana,” said a  Turkish man as he chided a female Syrian student in a Oct. 17 video taken in Istanbul. A Turkish woman joined in, accusing the Syrians of enjoying lavish lifestyles in Turkey rather than going back home to fight, dismissing the student’s explanation that she has nowhere left to return to.

Turkey hosts the world’s largest refugee population as an economic decline makes what few jobs there are harder to come by. At the same time, those with jobs have seen their spending power weaken, fanning discontent over the government’s refugee policy under President Recep Tayyip Erdogan, who’s facing re-election within two years.

Some 4 million Syrians who fled their country’s civil war have for the most part lived peacefully side by side with Turks for several years. The government, however, is trying to contain an anti-immigrant sentiment that has been rising nationwide.

“Seven foreign nationals have been rounded up in a probe over the provocative social media posts and they will be processed for deportation,” Turkey’s migration authority said in a statement late Wednesday.

Bracing for a potential backlash over the weakening economy as well as his refugee policy, Erdogan threatened a new campaign against U.S.-backed Kurdish forces in Syria, which may also help him gin up nationalist support.