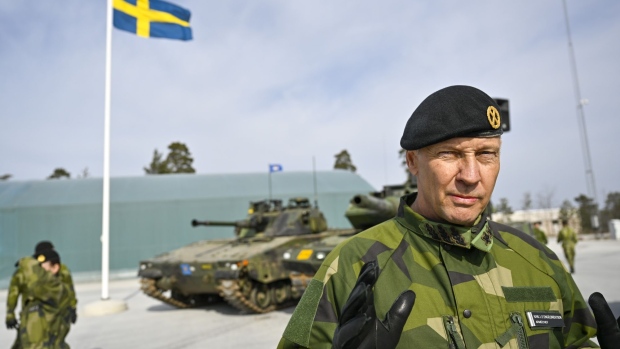 Karl Engelbrektson, commander of the Swedish Army, speaks to member of the media at the base of the Swedish Army's Gotland Regiment near Visby, Sweden, on Friday, March 25, 2022. Sweden's armed forces are boosting preparedness in regions including the Baltic island of Gotland, citing Russia’s increased military activity in the area. Photographer: Mikael Sjoberg/Bloomberg , Bloomberg

Erdogan cited concerns over activities in both countries of supporters of separatist Kurdish militants who have been fighting for autonomy in Turkey’s southeast for decades.

Any enlargement of NATO requires unanimous approval of the alliance’s members. Turkey’s been a NATO member since 1952.