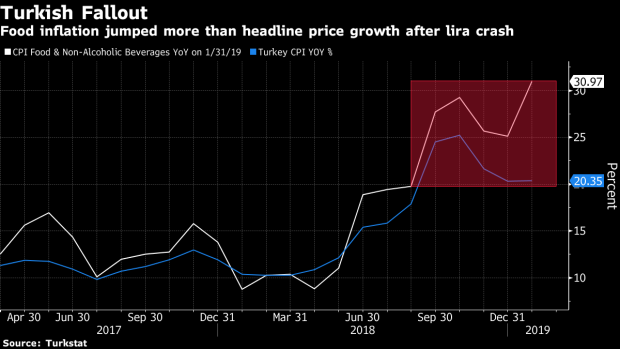 Handwritten price signs sit beside displays of fresh fruit for sale at a market stall in the Gungoren district of Istanbul, Turkey, on Friday, Oct. 5, 2018. After President Recep Tayyip Erdogan's repeated calls for a crackdown on price hikes, municipal police have found themselves on the frontlines of Turkey's war on inflation. Photographer: Kostas Tsironis/Bloomberg , Bloomberg

(Bloomberg) -- Turkish inflation rate inched up in January as skyrocketing food prices offset the impact from tax breaks on utilities and key goods.

Consumer prices rose 20.4 percent in January from a year earlier, compared with an increase of 20.3 percent in December, Turkstat said on Monday. The median estimate in a Bloomberg survey of 23 analysts was for an annual rate of 20.3 percent.

To contact the reporter on this story: Cagan Koc in Istanbul at ckoc2@bloomberg.net