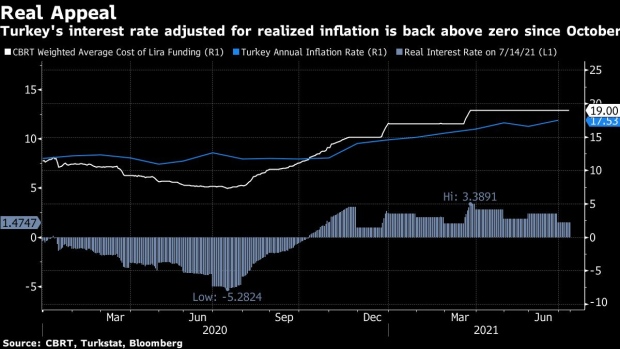 Pedestrians walk through a a busy retail street close to the Grand Bazaar in Istanbul, Turkey, on Wednesday, Feb. 2, 2021. Turkish inflation quickened for a fourth month as the lingering impact of a weak lira led to a broad-based rise in prices. Photographer: Nicole Tung/Bloomberg , Bloomberg

(Bloomberg) -- Turkey’s inflation rate probably jumped for a second month in July, fueled by higher energy prices and a reopening economy, reducing still further the likelihood of a summer interest-rate cut sought by the president.

Data due Tuesday will show inflation rose an annual 18.6%, up from 17.5% in June, according to the median estimate in a Bloomberg survey of 21 analysts. All the economists predicted an acceleration in price growth.

Rising global energy costs forced the government to hike the price of electricity and natural gas in July. Inflation was also pressured by a significant increase in activity in the travel and tourism sectors as a week-long religious holiday saw coastal resorts fully booked.

If Tuesday’s data tallies with economists’ expectations, Turkey’s benchmark rate adjusted for inflation would drop to 0.37% from 1.47%. That would make it harder for central bank Governor Sahap Kavcioglu to start easing monetary policy in August, as President Recep Tayyip Erdogan had urged.

The central bank raised its year-end inflation forecast on July 29 but projected a significant drop in price growth in the final quarter that could open a window for the interest-rate cut later in the year. Consumer-price inflation will finish 2021 at 14.1%, compared with a previous forecast of 12.2%, Kavcioglu said.

Nihan Ziya Erdem, chief economist at Garanti BBVA Securities, said inflation would likely range between 17% and 19% until falling to 16% at the end of the year. “We think that room for an easing of monetary policy could emerge starting from October with weakening inflation risks,” she said, predicting the policy rate would be reduced by a total of 150 basis points in the the last quarter.

“I expect inflation to peak in September,” said Can Ayan, an Istanbul-based economist at Aktifbank. “I don’t expect a rate cut before December, since an earlier cut would create an upward pressure on the inflation outlook.”

Kavcioglu has kept the benchmark interest rate unchanged at 19% since his appointment in March as rising prices and a lira that’s lost more than 15% against the dollar during his reign blight the economy’s recovery from pandemic lockdowns. He has pledged to maintain a positive rate when adjusted for realized and expected inflation, and to maintain tight policy until the bank’s 5% inflation target is achieved.

Turkey’s central bank will hold its next rate-setting meeting Aug. 12.