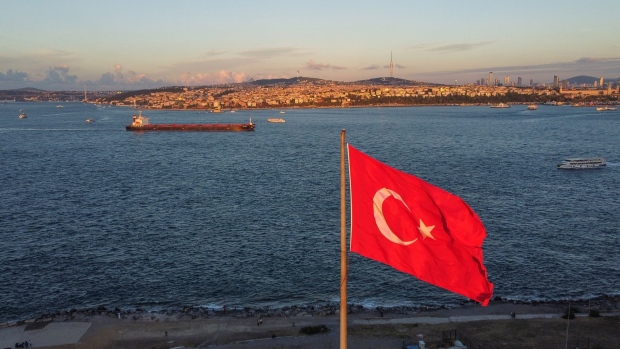 A tanker sails along the Bosphorus strait in Istanbul, Turkey, on Monday, Oct. 4, 2021. Turkey's consumer inflation accelerated in September, driven by a surge in the cost of energy. Photographer: Moe Zoyari/Bloomberg , Bloomberg

(Bloomberg) -- A spat that’s preventing tens of oil tankers from passing Turkey’s vital shipping straits may be edging closer to a resolution as the government negotiates with insurers on how to prove the ships have the necessary cover for transit.

The situation has already ensnared millions of barrels of mostly Kazakh crude and is a consequence of G-7 sanctions on Russia’s oil exports that created concern for Turkey over vessels’ insurance status.

After a back-and-forth lasting several days about how insurers can provide the necessary proof, Turkish authorities have sent out a sample letter that would satisfy their demands, according to a notice from a local port agent.

The letter is close to what the insurance industry has already put forward, offering hope that a deal might be close, according to one shipping official with knowledge of the situation.

The G-7’s sanctions effectively bar tankers from obtaining industry standard insurance for Russian oil cargoes unless the price of the crude is $60 a barrel or less.

The normal way of checking cover is to look on an insurer’s website and entering a ship’s details. But doing that mightn’t necessarily satisfy Turkey that a cargo wasn’t purchased above the $60 threshold — thereby rendering its insurance invalid.

That prompted Turkey to ask for additional proof in the form of a letter, something the insurance industry has resisted for the precedent it sets, and the liability it might create if any information were to be incorrect.