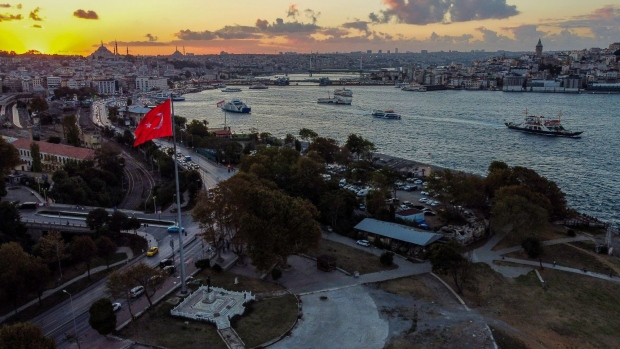 Passenger ferries sail along the Bosphorus strait during the evening sunset in Istanbul, Turkey, on Monday, Oct. 4, 2021. Turkey's consumer inflation accelerated in September, driven by a surge in the cost of energy. Photographer: Moe Zoyari/Bloomberg , Bloomberg

The net foreign currency position cannot be more than 5% of equity, according to the new rule published in the Official Gazette on Friday. The limit was 20% previously.

Some banks will have to reduce their FX surplus by Jan. 9 when the new rule comes into effect. Private lenders’ net FX surplus is 7% of their equity as of December, according to the official data.

The move came after a warning letter sent by the central bank saying banks have been carrying out the transactions for their own balance sheets and that this has triggered market volatility.

In recent months, the central bank has warned banks multiple times to avoid significant foreign-exchange transactions with foreign banks outside of market hours.

The Turkish lira has lost about 29% of its value against the dollar so far this year, and ranks as the worst performer in emerging markets after the Argentine peso.