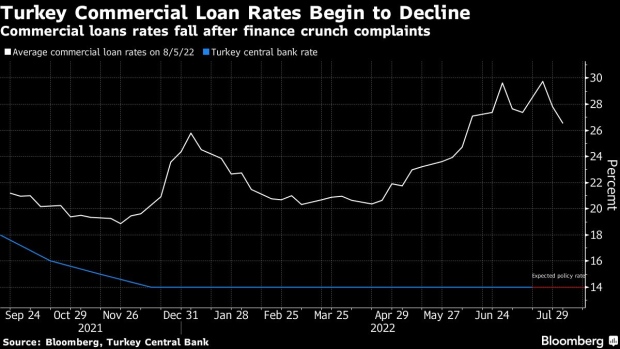 A vendor arranges a display at a fishmonger's stall in Istanbul, Turkey on Thursday, April 21, 2022. Turkish inflation soared to a fresh two-decade high in March, leaving the lira increasingly vulnerable by depriving the currency of a buffer against market selloffs. , Bloomberg

(Bloomberg) -- Turkey is poised to stick with an unconventional monetary policy that’s left it with the world’s most negative interest rates when adjusted for inflation.

Even with consumer prices now running at a 24-year high, economists surveyed by Bloomberg are unanimous that the central bank will leave its benchmark at 14% for an eighth month at a meeting on Thursday. But increasingly, analysts at banks like SEB AB and Barclays Plc see a risk that borrowing costs may need to rise within months.

“I have an emergency rate hike in my forecasts before the end of the fourth quarter, but the timing is highly uncertain,” said Per Hammarlund, chief emerging markets strategist at SEB in Stockholm. “Only a confidence crisis will prompt a hike.”

Although Governor Sahap Kavcioglu hasn’t acted to contain the blaze of inflation by raising rates, the central bank has rolled out macroprudential measures that helped slow loan growth momentum in July. It’s also relied on backdoor interventions and the introduction of state-backed accounts that shield savers from lira weakness.

The approach has allowed inflation to gallop near an annual 80% and left the lira vulnerable to a sell-off. Already among five of the world’s worst performers this year against the dollar, the Turkish currency is down about 1.4% since the previous rate meeting in July.

“The economy is crying out for a rate hike to help curb inflation and support the lira. Despite this, we do not expect the central bank to raise the main policy lever in the near term. The bank sees this approach as a mediating move between the economic fundamentals warranting a hike and the political leadership calling for a cut. In reality, it is leaving inflation untamed and the currency unsupported.”

But an increase of more than $10 billion in gross foreign reserves over just two weeks may give the central bank the confidence that it can wait out the pressures, especially as policy makers expect inflation to peak soon. Kavcioglu has blamed a global rally in commodity prices, partly caused by Russia’s invasion of Ukraine in February.

Even so, the central bank last month sharply revised up its forecasts for prices. It now expects inflation to reach a high of around 85% this fall, before ending the year near 60%, or 12 times its target.

The view of most analysts is less upbeat. Bloomberg Economics predicts price growth will approach 90% in the third quarter and only slow to 69% at the end of 2022.

A bigger unknown is what President Recep Tayyip Erdogan makes of the pause in place since a round of rate cuts ended late last year. Notorious for his opposition to higher borrowing costs, Erdogan has been largely silent on monetary policy since promising in June that rates will fall.

Erdogan is intent on turborcharging growth by focusing on exports and employment as part of what he calls a “new economic model.” The cost-of-living crisis unfolding in Turkey is a threat to his popularity, however, ahead of elections scheduled for next June.

Besides political pressure, Kavcioglu also has to contend with complaints from businesses that warned of a finance crunch last month as commercial loan rates reached 30%. The cost of credit has dropped in the weeks since.

Throughout the year, Kavcioglu has insisted that Turkey has the policies in place to fight inflation, a message he repeated at a presentation in July.

“The government has invested too much political capital in the low-rates policy to abandon it lightly,” said Nick Stadtmiller, director of emerging markets at Medley Global Advisors. “I doubt we will see rate hikes from the central bank any time soon unless they’ve run out of options.”