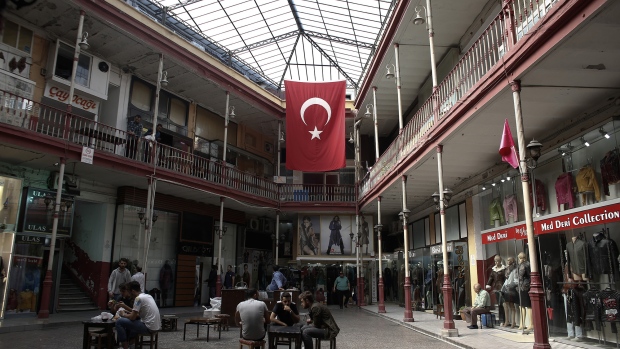 Pedestrians sit in the atrium of a leather clothes market in Istanbul. , Photographer: Kostas Tsironis/Bloomberg

(Bloomberg) -- The Turkish government plugged its deteriorating finances in July with an outsized cash infusion from the central bank.

The monetary authority transferred around 22 billion liras ($3.94 billion) to the Treasury last month, the biggest deposit since an annual dividend payment in January, according to data on its website. Without the disbursement, the government would have posted a budget deficit of about 12 billion liras, instead of a 9.9 billion lira surplus reported on Thursday.

The central bank outlay comes amid an economic slowdown that has dented tax revenue, prompting the government to seek other sources of income to finance its widening deficit. Last month, the government passed a law allowing it to tap around 40 billion liras of central bank cash held in its so-called lira reserve fund, a pool of money set aside by the policy maker for use in extraordinary circumstances.

Turkey’s budget deficit is set to widen to 3.7% of output by the end of the year, the biggest shortfall since at least 2012, according to the median estimate in a Bloomberg survey of economists. While tax income rose an annual 7.3% in July, when adjusted for consumer inflation running at 16.7%, revenue slumped for an eleventh straight month, the longest streak in 10 years.

Central bank cash will probably continue to prop up government finances in August, according to the central bank data, which show the monetary authority already transferred 19 billion liras to the Treasury in the first week of the month.

The injection should help bring the 12-month rolling deficit toward the government’s year-end target of 1.8% of output this month, according to Erkin Isik, an economist at QNB Finansbank in Istanbul. Still, the gap could widen to 2.5%-3% of gross domestic product by the end of the year, he said.

Central bank cash is accounted for in monthly government budget data under “Treasury portfolio and subsidiary income.” The item jumped to 22.3 billion liras in July from around 750,000 liras a month ago.

To contact the editors responsible for this story: Onur Ant at oant@bloomberg.net, ;Lin Noueihed at lnoueihed@bloomberg.net, Constantine Courcoulas, Taylan Bilgic