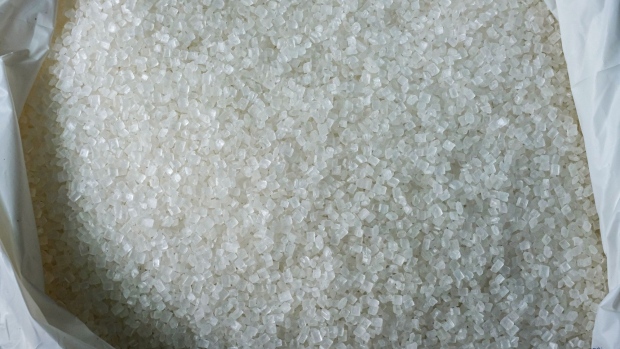 Refined sugar at a store in New Delhi, India, on Wednesday, May 25, 2022. India will restrict sugar exports as a precautionary measure to safeguard its own food supplies, another act of protectionism after banning wheat sales just over a week ago. Photographer: T. Narayan/Bloomberg , Bloomberg

(Bloomberg) -- Turkish state-run sugar producer Turkseker has increased the price of granulated sugar by 67% to 13 liras (77 cents) a kilogram for some discount markets, Bloomberg HT reported, citing a company statement.

The price for other clients rises by 36.4% to 15 liras a kilogram. The increases, which follow a price hike by Turkseker at the end of March, take effect June 27. Both price categories are excluded from value added tax.

A cost-of-living crisis that’s seen inflation soar to the highest in nearly a quarter of a century is weighing on the popularity of President Recep Tayyip Erdogan’s ruling party. Rising global energy costs, loose monetary policy and a depreciation of the local currency have fueled a broad-based jump in Turkish consumer prices. CPI reached a 24-year high of 73.5% in May, with food and non-alcoholic beverage prices up 92%.

Granulated sugar accounts for 0.3% of the consumer price basket, but it’s an important raw material for many items in the food and non-alcoholic beverage category, which constitutes for a quarter of the inflation measure.