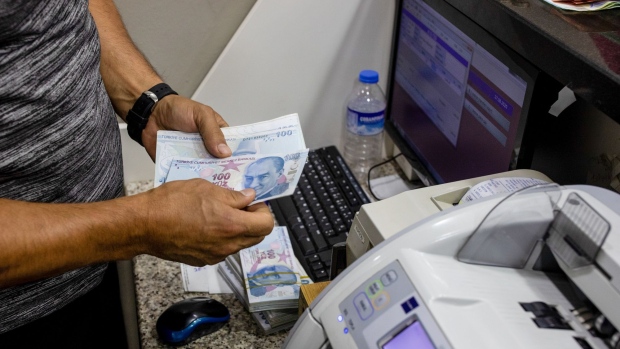 A Bureau de Change currency exchange worker counts up Turkish lira banknotes for a customer in Istanbul, Turkey, on Thursday, Aug. 27, 2020. Economic activity fell faster and deeper in emerging markets than in advanced economies as the Covid-19 shock hit, and the recovery is proving slower and shallower. Photographer: Nicole Tung/Bloomberg , Bloomberg

(Bloomberg) -- Turkish central bank Governor Sahap Kavcioglu’s unexpected interest-rate cut has damaged his credibility and fueled concerns over further weakness in the lira, according to strategists and analysts.

“Today’s move will have destroyed the credibility that Mr. Kavcioglu had built up over the past six months,” said Jason Tuvey, senior emerging-market economist at Capital Economics. The Monetary Policy Committee reduced its key one-week repo rate by 100 basis points to 18%. Only one of the 23 economists surveyed by Bloomberg anticipated a cut, predicting a reduction of 50 basis points.

The rate cut sent the lira to a record low against the dollar and made it the worst-performing emerging-market currency this year. The yield on 10-year government bonds soared by the most since March 22, when the ouster of the central bank’s former investor-friendly governor triggered a selloff in the country’s assets.

Here’s what some market watchers are saying about Thursday’s decision: